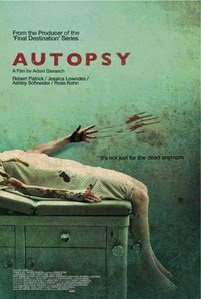 A group of college dropouts traveling across the United States get a bit too spirited on Mardi Gras and end up crashing their car on a deserted highway in Louisiana.  To make matters worse it appears that they ran over an escaped patient.  Their phones don't work, but seemingly rescue comes in the guise of two paramedics that arrive to retrieve the patient who they say escaped before surgery, and they suggest that all the kids come along.

Once they arrive, Bobby (Ross Kohn) finds a shard of glass in his side, pulls it out and begins to faint.  Fearing that he might have punctured a lung he is taken into surgery immediately, but his girlfriend Emily (Jessica Lowndes) begins to get suspicious when nurse (Jenette Goldstein) tries to prevent her from seeing him.  To make matters worse her friends begin to vanish after going in for examination.

She has a reason to be concerned, as Dmitriy (Arkadiy Golubovich), a man they met in New Orleans and who quickly fell for Clare (Ashley Schneider), the other woman in the group, ends up becoming an involuntary organ donor.  Jude (Ross McCall), Clare's ex-boyfriend, is lured off with the promise of free drugs and ends up tripping in a room with a dead body.  All the while the seemingly friend Dr. Benway (Robert Patrick) reveals that he is not all there.

It turns out that Mercy Hospital is actually closed, but Benway has set up shop with a nurse and couple of escaped cons to collect random people in an effort to keep his wife Lisette (Janine Venable) alive until he can transplant her brain into another host.  It seems that Emily is that perfect host, but she intends to keep her mind her own.

I was prepared for this to be awful.  The first few minutes looks like the typical bunch of entitle rich kids bumming around the country and making asses out of themselves - otherwise the type you don't mind getting murdered wholesale in a movie.  Surprisingly, this does take some other turns, even though they are not anything new.  The mad scientist trying to keep his wife alive has been done since the Bela Lugosi days.  It just so happens that they got Robert Patrick to play the part, and he does a great job.

Also need to congratulate Jessica Lowndes, as she is quite good as the protagonist.  The character of Emily, though, still makes many of the stupid horror movie mistakes we're familiar with, including taking it for granted that the bad guy is dead.