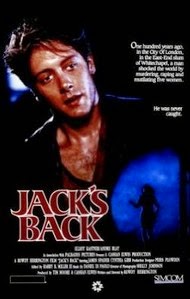 Los Angeles is gripped by a series of murders that imitate those of Jack the Ripper, with each one meticulously copied and 100 years to the date.  As the police try to catch the killer before the last murder is duplicated, John Wesford (James Spader) has his own problems.  He is a medical student working in a free clinic in Echo Park, and his boss Sidney (Rod Loomis) doesn't like the fact that he spends quite a bit of time helping the homeless.  Idealistic, he grew up in the neighborhood and cares what happens to the patients.

One of the patients he recognizes: a pregnant prostitute named Denise who comes to the clinic for an abortion, which is denied by Sidney.  Recognizing her as the girl he went to prom with, he decides to go see her.  When he arrives, however, he sees his coworker Jack (Rex Ryon) also arriving at Denise's apartment.  John enters and finds her throat slashed and her body mutilated.  Jack denies having anything to do with it, claiming he only arrived to give her an abortion.  They fight and Jack flees with John in pursuit, but John loses him.  Returning to the clinic, however, John finds that Jack is still there.  Another altercation ensues and ends with Jack strangling John and, thinking him dead, arranging to make it look like a suicide.  John's not exactly dead, but Jack goes ahead with it anyway.

Nearby, John's estranged twin brother Rick (also Spader) wakes up from a nightmare in which he sees his brother being murdered.  After the police find the body they automatically assume John was the Ripper, but Rick tries to convince them that his brother was murdered.  It begins to become obvious that John was not the killer, but the suspicion quickly begins to fall on Rick as he pursues Jack with the help of Chris Moscari (Cynthia Gibb), another coworker of John's who also believes he is innocent.

Jack is eventually captured and admits to John's murder, but maintains his innocence - and more evidence comes to light that the real killer may still be out there.

This is no masterpiece, but it does make me remember what I like so fondly about good '80s movies.  They didn't pull punches, they didn't waste a lot of time trying to build characters (John wears a silly Hawaiian-style shirt, making him the caring type, while bad boy Rick wears a leather jacket - all you need to know so that you can tell they are opposites).  Instead, although you kind of know who the bad guy is all along, you do end up swept along with the story and just want to see where it goes.  The movie opens with a bang and just keeps on going.

Personally, I kind of wish the movie had ended after it is clear that Jack was not the killer.  Of course, this is still a Hollywood film of its time, so there has to be an ending to wrap everything up.  Still, instead of the final fight with the bad guy, it would have been more effective to know the bad guy was still out there and got away with it, just like the original Jack the Ripper.