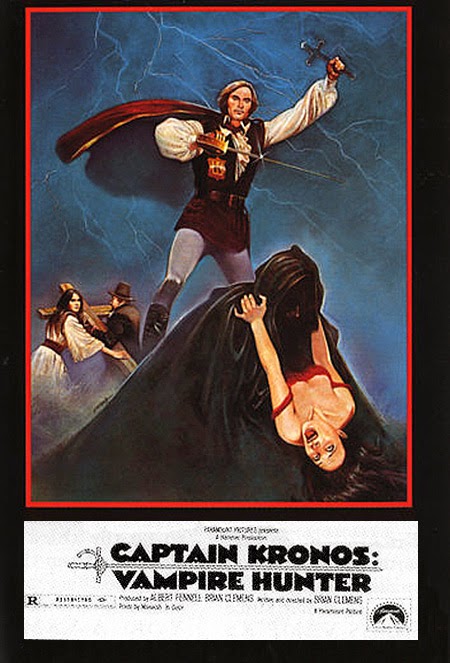 A vampire is attacking young girls in a European village.  However, instead of draining them of blood, he is draining them of life by sucking out their youth through a kiss.  Dr. Marcus (John Carson) sends word to an officer he treated during a war, Captain Kronos (Horst Janson), who happens to be a vampire hunter.  Kronos travels the countryside with his hunchbacked assistant Grost (John Cater) killing off the different kinds of vampires that exist in order to avenge a family tragedy.

On the way to the village he encounters Carla (Caroline Munro) locked in the stocks along the way for dancing on a Sunday.  He frees her and she joins him, quickly becoming his lover.

Upon arrival they begin to investigate and realize they are getting close to the truth after they are attacked in a tavern by a band of cutthroats led by Kerro (Ian Hendry) who are paid to dispatch Kronos.  This fails, and those responsible for the deaths become even more apparent once Dr. Marcus is turned and they discover how to kill this particular breed.  Armed with the special weapon needed, and using Carla as bait, the three aim to end the terror once and for all.

This late entry from Hammer Studios delivers what it promises.  The plot is straightforward, Munro is beautiful and Janson will keep the ladies entertained.  The idea of a different kind of vampire is also interesting.  Writer/director Brian Clemens also wisely doesn't get too dark, often injecting quite a bit of humor, while the vampires themselves are quite effective when on screen.

The only major problem is when seeing the aftermath of their attacks; instead of using makeup they instead used old men in wigs to show what happened to the girls.  While there is plenty of humor throughout the film, this bit of unintentional mirth tends to disrupt the proceedings.