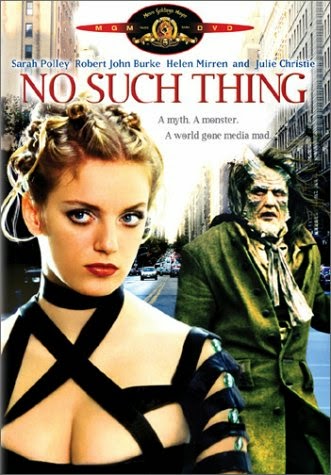 A solitary, unnamed monster (Robert John Burke) lives in an old missile silo on a small island off the northern coast of Iceland.  He is occasionally visited by the curious and typically dispatches of them once he gets annoyed.  He is guarded by the inhabitants of a small village that try to keep him happy and from leaving to resume his ways of killing as he has done throughout history.

One of the recent slain is the fiance for Beatrice (Sarah Polley), a gofer for a big-time network boss (Helen Mirren) who is constantly looking for the next big story.  After the station receives a tape from the monster, Beatrice talks the Boss into letting her travel to Iceland to meet with the monster and see if the legend is real.  On the way, however, her plane is re-routed through Brussels and crashes into the ocean, leaving Beatrice the only survivor.

Taken to a hospital in Reykjavik, Beatrice undergoes an experimental surgery to restore her ability to walk and, upon its success, continues her journey.  After meeting with the Monster she finds that he is an unremorseful, alcoholic insomniac who just wants to die.  The unfortunate problem is that he cannot, although a scientist named Dr. Artaud (Baltasar Kormákur) informed him that he has found a way to end his existence.  Problem is, Artaud was quite insane and was kidnapped by the U.S. government to use his experiments to advance the military.

Beatrice makes the Monster promise not to kill anyone in exchange for a promise to find Artaud.  She calls the Boss, arranging for transport back to the United States in exchange for the exclusive story and fulfilling the Monster's wishes.  However, the U.S. government has other ideas, experimenting with the Monster to find out what makes him tick, while the Boss plans on turning the whole incident into an ongoing reality show.  Beatrice and her coworker Margaret (Annika Peterson) hatch a scheme to get the Monster back to his lair so Artaud can complete his work, staying one step ahead of the U.S. and U.N. militaries.

When I saw Hal Hartley's name come up as director I understood I was in for something a bit different than a normal horror film.  In this I was not disappointed.  As expected, this does spend some time investigating whether humans are the true monster while also questioning where our myths come from and if we have the power to bring life to our legends.

Robert John Burke is great as a jaded, immortal creature that has been reduced to hiding away from the creatures he used to terrorize.  Sarah Polley portrays Beatrice as naive and morally ambiguous, one moment seeming a paragon of virtue and the next literally wallowing in the shallow end of her culture.  Helen Mirren as always puts in a great performance, at once devoid of any emotion and at times appearing to be compartmentalizing her humanity in an effort to forward her career.  Set against a deteriorating world where one can't get across Manhattan without religious fanatics setting off gas bombs in the subway or people being shot in full view of patrons at the airport, and a populace that confronts such things with mild annoyance and boredom, you have a mix of different themes that, although this is one of Hartley's more commercial films, still fills it with enough different themes to make it worth repeat viewings.