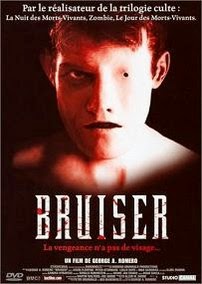 Henry Creedlow (Jason Flemyng) is another invisible drone at a magazine.  The only reason his boss Milo Styles (Peter Stormare) even knows who he is is because he is sleeping with Henry's wife Janine (Nina Garbiras).  Milos's wife Rose (Leslie Hope) knows that the infidelity is occurring and is attempt to capture it on film as part of starting divorce proceedings against him.  On top of it, she and Henry have an unrequited love situation happening, while Henry's best friend Jim (Andrew Tarbet) doesn't seem to be looking over Henry's investments like he should.

At a barbecue thrown at Milos's house, Rose shows Henry her latest hobby: making masks.  They start out white and featureless, and she asks people to paint them to match their personality so that she can hang them on a tree.  Henry does not know what to put on his and initially leaves it blank, forgetting about the project once he sees his wife giving Milos a hand job.  He confronts her and, after going home, she returns to spend the rest of the night with Milos.

The next day Henry wakes up and finds that his face has now turned into a copy of the white mask.  As he tries to figure out what is happening his housekeeper Katie (Beatriz Pizano) shows up and starts taking money from his wallet and stealing silverware.  Henry confronts her and, in a fit of anger, kills her.  Janine returns, thinks Henry is gone, and leaves to go back to Milos.  During an impromptu lovemaking session on the conference table in Milos's office, Rose comes in and photographs it for evidence.  While Milos chases after Rose, Henry enters the conference room and murders Janine by hanging her out of the building by an extension cord.

At first the police think Rose may have done it.  However, after killing his friend Jim due to financial discrepancies, he calls a local talk show and admits that it is him and prepares to use a Halloween party that he set up as a way of dispatching Milos once and for all.

It seems like, outside of Martin, little that George Romero does outside of his Living Dead films gets the attention it should.  This movie, in fact, ended up going to video as the distributor marketed it as another horror film at a time when Romero's type of horror film was out of style.  The result: direct to video.  It's not a wonder that he's stuck with his zombie films since.

That's not to say this is a masterpiece on the same level as Martin.  It more closely resembles Monkey Shines or The Dark Half in truth.  Still, Peter Stormare puts in an absolutely hilarious over-the-top performance as Milos, and Jason Flemyng seems more than happy to spend a good portion of the movie behind a mask.  Truth is, Romero couldn't have chosen a more nondescript actor for the part, which is kind of the point.  In the end it is quite an enjoyable revenge film.