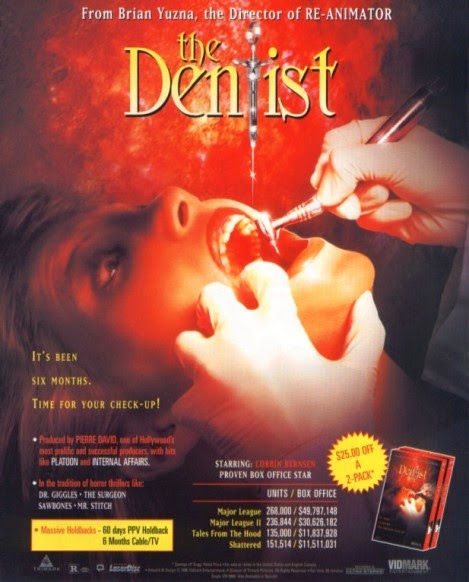 Dr. Alan Feinstone (Corbin Bernsen) is a successful Los Angeles dentist with a blonde wife (Linda Hoffman) and a beautiful house.  Unfortunately he also has I.R.S. problems and a pool boy (Michael Stadvec) that seems to be "servicing" most of the neighborhood, including his wife Brooke.  Always one step away from losing it, the sudden discovery of his wife's infidelity (on their anniversary) pushes Feinstone over the edge.

At first he attempts to keep his composure but gradually starts to have hallucinations which lead to him to see a young boy with a mouth full of cavities (whose mother quickly escorts him out when Feinstone draws blood) and to molest and almost kill another patient whom he mistakes for his wife.  His assistants make the decision to send all the other patients home for the day, and Feinstone uses it as an opportunity to lure his wife to the office and do some impromptu work on her teeth.

The next day he uses her to lure the pool boy to his death before heading to the office to take out more of his anger on his patients and staff.  At this point, however, he has already attracted the attention of the police.  The previous day he was attacked by his neighbor's dog (which he then shot), and the police, originally thinking it was a robber in the area, then try to find out why he lied about having a gun.  They visit the house to find the dead pool boy and the disfigured Brooke and head off to catch him before he can do any more damage.

It is amazing that a movie with such a low body count could be so disturbing.  I think that is what the makers (including Stuart Gordon on the script and frequent Gordon collaborator Brian Yuzna directing) were counting on.  Going to the dentist is such a frightening experience as it is that to suddenly have the doctor lose it and fiddle around in your mouth with sharp objects while you are out of control hits much closer to home than a maniac with a chainsaw.  Most of us will never run into a band of cannibals off the main road, but unfortunately we will have to visit the dentist.

In that way the movie is effective despite some major flaws (the girl at the end really only needed to do one thing - run for the exit - but instead hides in a closet).  It is also refreshing to see something that could happen (although great exaggerated) rather than what this movie could have been which was just another rote slasher with a dental drill instead of a machete.