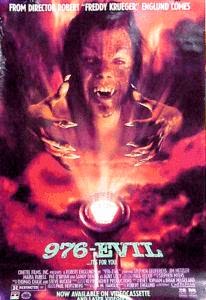 Hoax (Stephen Geoffreys) lives with his ultra-religious mother Lucy (Sandy Dennis) and cousin Spike (Patrick O'Bryan).  He repeatedly suffers bullying at the hands of a gang of kids led by Marcus (J.J. Cohen), and together they all attend what appears to be the worst high school in existence.

Spike spends a significant amount of time gambling with Marcus and his friends at a local movie theater.  After losing too much money and betting the pink slip on his motorcycle, Spike goes home and, on a whim, calls a 976 number on an ad that falls out of a magazine.  The number goes to a service called Horrorscope, and the recording on the other end tells him to seize what is his.

It turns out his aunt Lucy has been keeping back money that was left to him by his father.  He retrieves it and, while arguing with her about whether or not it is stealing, fish begin to rain from the sky.  The impromptu pescatary shower reaches the desk of Modern Miracles magazine, and they send Marty (Jim Metzler) out to investigate.  After interviewing Lucy, Marty witnesses Spike almost get killed by a driverless car after refusing to do what the voice on the other end of the phone says.

After picking up his girlfriend Suzie (Lezlie Deane), Spike returns home and then takes her out to the movies - only to run into his gambling buddies.  Fed up with waiting, she leaves and runs into Hoax, who has found the ad while going through his cousin's room and was told he would meet the girl of his dreams at the movies.  Suzie and Hoax go out for a late pizza and everything seems to work out fine until Marcus shows up and embarrasses him.  Turns out Hoax grabbed Suzie's panties that she left at Spike's.  She calls him a pervert and leaves.

Angry, Hoax calls the number again and receives instructions on how to cast a spell to scare Suzie using his spider.  It spirals out of control and Suzie is killed.  Though it is an accident, Hoax quickly realizes what kind of power he may achieve by following the advice from Horrorscope.  Soon he is taking revenge for all the wrong done to him while slowly turning into a demon himself, intent on destroying the world if he can, leaving only Spike, Marty and his principal, Mrs. Martinez (Maria Rubell) to stop him.

Robert Englund began his directing career with this movie.  Keep in mind he is a decent horror and comedic actor, but often the films he directs turn out to be this side of unwatchable.  This one is an exception.  It by no means ever hits greatness, but it is entertaining despite its ultimately silly premise.

The best thing seems to be the setting.  I was halfway expecting to find out everyone was already in hell as all the buildings in town, from the downtown to the high school (which looks like they are holding school in an abandoned warehouse) to the building that houses the phone operation looks like it is abandoned or condemned.  The city is named once in a phone call that Marty makes as "Garden City", but it is as far away from being a garden as possible.  Somehow even the school bathrooms are not a place to venture unless you know self defense techniques.

A major barrier for modern audiences is that even the title is from another era.  For those not familiar, 976 was a prefix that was used for sex lines, chat lines (like the ones you still see advertised late at night) and recorded material.  It was a precursor to 900 numbers and largely went away in the early 1990s as those took preference.  So, in essence, everyone would be calling to get their future told - at about $1.95 a minute.

In the end the movie is hampered by bad editing in spots and a shoestring budget.  Still, it is one of the more entertaining movies from Englund behind the camera, although it is still best to stick to him being in front of it.