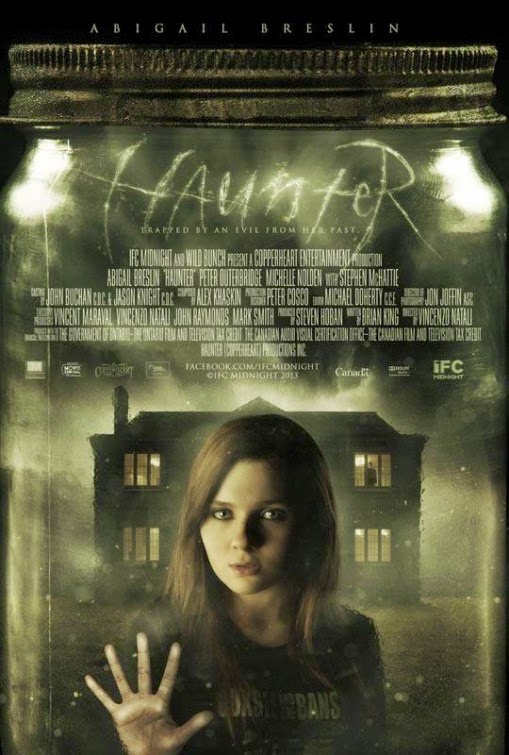 Lisa (Abigail Breslin) wakes up one morning realizing that she has been reliving the same day over and over.  Ostensibly, it's the day before her birthday in 1985.  Her brother Robbie (Peter DaCunha) has lost his glasses and is playing Pac-Man repeatedly on the Atari, mom Carol (Michelle Nolden) is worried about missing clothes and her father Bruce (Peter Outerbridge) is constantly trying to fix the car.

What Lisa has suddenly realized is that she, and her whole family, are dead.  She doesn't know for how long or what happened, but she has realized that they died at some point and are unable to leave the house.  Soon, she starts to realize that there are other people in the house, which frightens her because she does not know if they are other ghosts or if the living is trying to contact her.

It does turn out that there is a living family in the house, but also the former owner of the house (Stephen McHattie) does not want her to contact them.  She succeeds, however, in connecting with a living girl named Olivia (Eleanor Zichy) who has discovered much about the history of the house - and is worried that what happened with Lisa's family is about to happen to hers.

I have seen many people bring up The Others when talking with this movie, but other than dealing with a family of ghosts there is no real connection.  The characters in The Others largely do not know that they are dead, and that movie largely has to do with moving on and acceptance.  Haunter, on the other hand, makes it clear from the beginning that the family is dead, and at least Lisa is aware of this fact.  It is also not about moving on, but rather solving a mystery and saving the lives of a living family.

In the mystery part it is pretty well-tread territory, but I don't mind this.  Everyone does a fine job in their parts, it is spooky when it needs to be and the world the ghosts inhabit is quite what I imagine what real ghosts see and experience.  I have some quibbles with the possession part, but since it is key to the plot I can let it go.

On a related note I am glad to see horror films starting to get away from the self-referential slasher films and homages and getting more into exploring what the supernatural is.  I know it has been done in the past, but with movies like this and Insidious I am starting to see many new ideas and angles being explored, and that makes up for the fact that at the heart of most of these are tried-and-true mystery and quest plots.