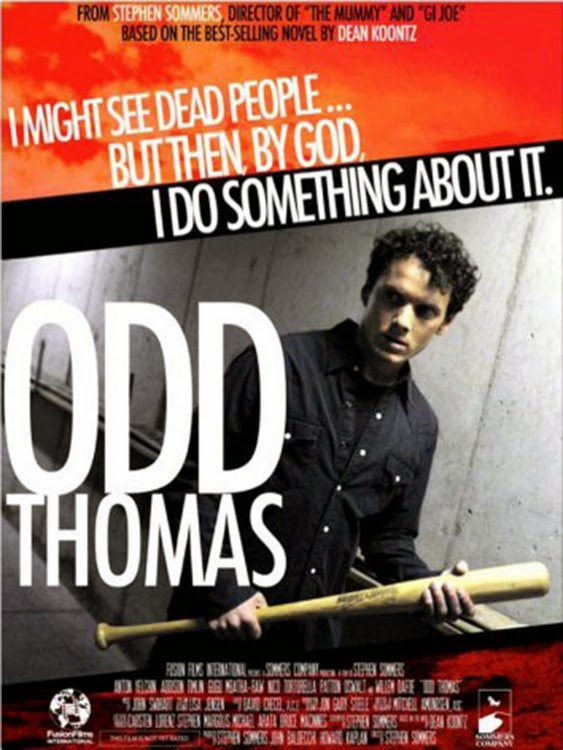 Odd Thomas (Anton Yelchin) is a young man living in the town of Pico Mundo, California.  He has a girlfriend named Stormy (Addison Timlin) and, due to his ability to see dead people and sometimes predict when bad things will happen, has a great relationship with the town's chief of police (Willem Dafoe).

He also occasionally see creatures called bodachs, which show up when people are going to die violently.  They also have the tendency to kill those who they find out can see them, so when a bunch of them turn up following a guy he and stormy nickname Fungus Bob (Shuler Hensley) he starts to get worried.  Combined with a number of dreams that he and others are having he begins to piece together that the someone is planning a massacre - and only he, with Stormy's help, can stop it.

I am not going to get any further into the plot than that as there is quite a bit to this movie that is worth seeing rather than describing.  From what I read this was adapted from a novel (also I guess there are some comics) with a good deal of characters and exposition cut out due to budget reasons.  Regardless, what is here is quite worthy and makes a great story that doesn't have to be ruined.  It would just be confusing to go through it all anyway, and in that way it reminds me heavily of John Dies in the End.

Let's just say that Willem Dafoe is not the bad guy (in fact he's rather sweet and fatherly here, since Odd's real father is off on some scheme and his mother is in an insane asylum) and Addison Timlin, while not always the best at delivering her lines, makes a great companion.  The fact that she reminds me heavily of someone I know who is quite similar in a number of ways helps.

Not really scary, of course, but definitely worth a view if you need a break from seeing the same horror plot over and over again this year.

Addition: I just saw this was from a Dean Koontz novel.  Surprising, since I usually don't equate Koontz with originality or enjoyment.  The only novel I've read by him that I liked was Watchers, so maybe it's time to give him a second chance on this one.