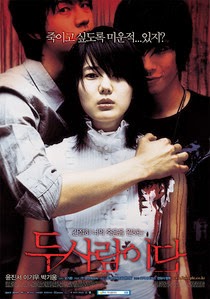 Kim Ga-in (Jin-seo Yoon) is a popular high school student and a member of the fencing team.  Her parents are successful, she has a boyfriend (Ki-woo Lee) who appears to be on an upward career path and everything seems to be going her way.  Only, per parents are worried.  They see a number of murders happening on television, all for fairly minor events, and are afraid that their family may be under some curse which will make them next.

As if to underscore this, Ga-in's aunt takes a tumble off a second-story balcony on her wedding day.  She survives, only to be killed by her own sister in the hospital.  Afterward, several people, from an intelligent but put-upon fellow student to a teacher to her own mother, try to kill Ga-in for unknown reasons.

The only person who seems to know what is going on Sung-min (Gi-woong Park), a new boy at school that it is rumored murdered his father.  He tells Ga-in not to trust anyone, not even herself.  When she goes looking for reasons why the things around her are occurring he takes her to meet Dae-yong Hwang (Jin-geun Kim), a man who murdered his wife at the slight urging of a voice over the phone that she was unfaithful.  Hwang, filled with guilt all his life, spent the better part of it searching for the person who urged him on - only to be taunted by the same person as time went on.

Returning home, Ga-in finds that her mother has recovered and things might be returning to normal.  However, she still finds it difficult to trust, and for good reason - someone close to her has been plotting revenge against her and her family all along, and she may not be as innocent as she seems.

This surprised me that it popped up from After Dark, especially since like Frontiére(s) it is a movie made on its own for a foreign market that largely puts most of the movies produced for the After Dark series to shame.  Largely I was impressed because instead of going for a huge body count the film dealt with deeper issues, such as jealousy, survivor guilt and how close to the edge we can get before our own petty jealousies push us over.  Voices explores all this wonderfully for two thirds of the movie.

Although I felt it had an exciting denouement, I was disappointed that it went for, at least as far as Asian horror films do, a traditional ending.  Various points fold on each other, some of it defying even the internal logic of the movie itself, finally ending on a note that doesn't completely invalidate the issues that came before but instead cheapens them to provide a typical supernatural horror villain.  It's not creepy girls with long hair for once, but it is still more explanation than the film really needed.  If there is one movie that needed a vague ending it was this one.

Still, don't let the After Dark moniker scare you, as this is largely well-acted and well-done.  It is also nice not to see any little girl ghosts for once.