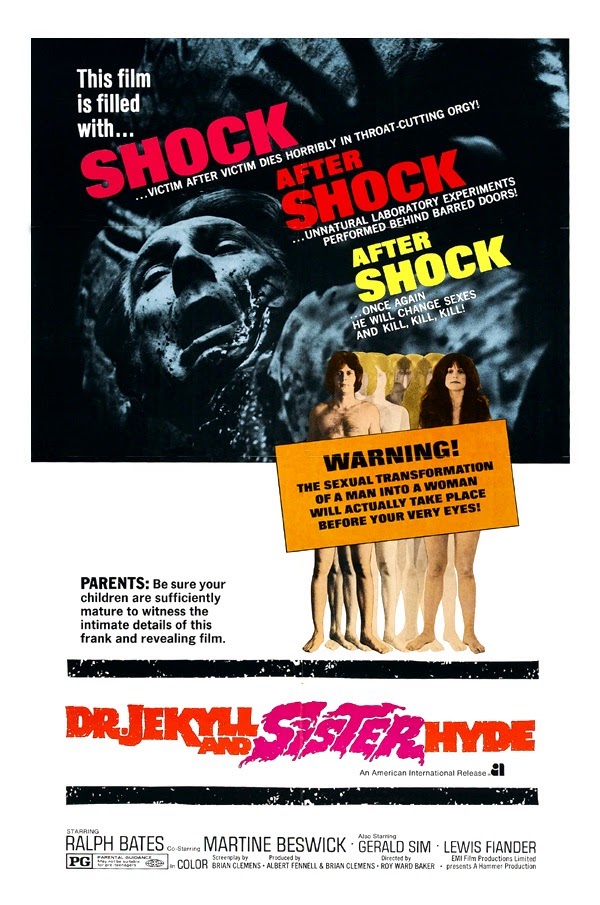 Dr. Henry Jekyll (Ralph Bates) is a scientist obsessed with finding the ultimate antivirus that will cure the world of disease.  Upon his friend Professor Robertson (Gerald Sim) mentioning that Jekyll would most likely die before finishing his work, the focus of the research changes to finding the "elixir of life" so that human beings can extend their lives indefinitely.

Jekyll decides that the fountain from which life springs is female hormones, and with the help of shady (and possibly necrophiliac) coroner Byker (Philip Madoc) and body snatchers Burke and Hare (Ivor Dean, Tony Calvin) he obtains fresh, young female corpses from which to remove the glands that contain the hormones.  His initial experiments appear to be a success, prolonging the life of a fly by a number of days.  The side effect, though, is that the male fly has suddenly become female.

Trying a refined version of the elixir on himself, Jekyll transforms from his mild mannered and scientifically obsessed male persona into that of a beautiful, and sexually aggressive, female, whom he christens "Hyde" (Martine Beswick) and claims to be his sister.  To complicate things, new neighbor Susan Spencer (Susan Brodrick) has taken a liking to Jekyll, while her brother Howard (Lewis Fiander) becomes enamored with Hyde.

After Burke is hanged and Hare blinded for their activities (which include procuring corpses that are a bit too fresh), Jekyll decides that in order to procure more hormone that he must take life himself and begins to murder prostitutes in his neighborhood of Whitechapel.  This gains the suspicion of Professor Robertson, who notices that the prostitutes are missing the very organs that Jekyll needs, leading to Hyde taking over when it comes to the murders and, eventually, deciding that she is going to take over completely.  This results in the death of Robertson and Susan being put in danger, and the ultimate denouement that one is familiar with from Robert Louis Stevenson's novella.

This is an interesting take on the story and is quite a daring film for the time.  It does have some female nudity on the part of Beswick, but where it really pushes the envelope are scenes with the Hyde's personality coming through in the effeminate Jekyll (causing an uncomfortable situation for Howard at one point), as well as an exploration of gender fluidity.  At this point it is hard to tell if this is what Hammer had in mind, but the film is definitely much less exploitative than the title or posters would have one believe.  Surprisingly all that was edited was some violence while the daring sexual material seems to have slipped by the censors.

There are problems.  While the mixture of Stevenson's story with the real-life Whitechapel murders (Jack the Ripper is not mentioned at all, but it's heavily implied to be Jekyll) and body snatchers Burke and Hare is quite interesting, it seems that so much effort was put into throwing all this together that someone forgot to write Hyde as more than a one-dimensional character.  In the story and the older movie adaptations there is much more depth, in many cases making Hyde the more interesting of the two personas.  Not so here.  Despite the gender-bending ideas in the script it still seems as if it was written by someone who had no idea what to do with a female character other than either a sex kitten or a damsel in distress.