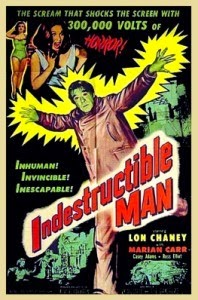 Charles "Butcher" Benton (Lon Chaney, Jr.) is scheduled to be executed the next day.  His lawyer, Paul Lowe (Ross Elliott) makes one last attempt to get Butcher to reveal where he hid the money from an armored car heist.  It seems Lowe planned it and, after the two guards were killed, convinced accomplices Squeamy Ellis (Marvin Ellis) and Joe Marcelli (Ken Terrell) to turn states evidence so that Butcher would be convicted.  Not trusting Lowe, Butcher hid the money and appears ready to take the secret to his grave - but not before informing Lowe that he will be back for all three of them.

The execution goes as planned.  However, Butcher's body ends up sold to a pair of scientists doing cancer research and he is brought back to life.  The difference is that the voltage burned out his vocal cords, leaving him mute, and it also altered his cell structure, making his skin impenetrable and giving him superhuman strength.  His faculties still intact, Butcher starts the trip from San Francisco back down to Los Angeles, killing anyone who gets in his way.

Back in Los Angeles Lieutenant Dick Chasen (Max Showalter) is convinced that Lowe had something to do with the robbery.  Although officially off the case due to Butcher's execution, he continues to investigate.  First stop is Eva Martin (Marian Carr), Butcher's love interest, but she seems to be just as much in the dark as everyone else.  Lowe also visits her, but has a bit more luck.  While she's gone he reads a letter Butcher left for her in case he died.  The map turns out to be of the L.A. sewers, and shows where the money is hidden.  Lowe immediately gets Squeamy and Joe back together in order to retrieve it.

Problem is, Butcher is back in town and, after realizing the map has been stolen, heads off to dispatch those who double crossed him.  By now the police, though incredulous, know what they are dealing with and begin hunting Butcher themselves.

All the famous Universal horror actors fell on hard times after their initial heyday, some harder than others.  Lon Chaney, Jr. continued to get work despite an extreme drinking problem, and unlike many of his contemporaries he ended up in some decent productions rather than creaky old retreads.  This is definitely one of my favorites.  He may be older, this may be a shoestring production (it was actually the support film for Invasion of the Body Snatchers) but he gives it his all, from the menacing opening to acting throughout with his eyes and facial expressions.  There is no sense of phoning it in here.

Sure, some of the acting is silly, as is the plot, but that makes a lot of the old '50s b-movies enjoyable.  A good amount of location filming around Los Angeles helps as well.  The whole thing is also sufficiently exciting and violent.  I would say it is one of the few movies of its type that delivers what it promised at the time.