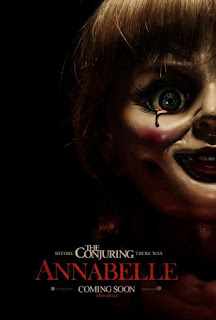 The Conjuring was one of the best horror films in a long time, despite the fact that the Warrens are absolute frauds that have admitted that they profit from clients that aren't all there.  Happily, James Wan knows how to make a great horror film, and one of the subplots involved a doll called Annabelle, supposedly the most evil thing stored in their archives.

Naturally, when I heard that they were making a movie based on Annabelle, I was interested.  I became less interested once I discovered that Wan had nothing to do with it, and when the reviews came out saying what a rote horror film it was, filled with jump scares and everything else that was largely left out of The Conjuring.

Still, it is a creepy doll, and dolls are about the creepiest thing in the world this side of clowns.

The doll itself, pre-evil (but still creepy) is purchased by John Gordon (Ward Horton) for his pregnant wife Mia (Annabelle Wallis), who collects dolls and makes clothing for them in her spare time.  It is 1970, and John is a doctor on his way up and Mia is a housewife.  One night they are awakened by a commotion at their neighbors' house and soon find themselves set upon by the neighbors' estranged daughter Annabelle and her boyfriend.  Mia is stabbed and John attacked, but the police break in at the last moment and shoot the boyfriend.  Annabelle commits suicide, with her blood, and seemingly her soul, entering the doll.

Strange things begin to happen around the house, and Mia becomes uncomfortable with Annabelle, asking John to get rid of it.  He puts it out in the trash.  However, while he is away, the burners on the stove turn on by themselves and light the kitchen on fire.  While trying to escape, Mia feels herself dragged toward the kitchen by an unseen force.  Luckily, neighbors rescue her from the house and, despite her trauma, she gives birth to her daughter Leah at the hospital.  Not wanting to go back, she is informed by her husband that he got his new position, so they are moving to Pasadena and putting the past behind them.

Only, as can be expected, Annabelle pops up in one of the moving boxes.  Mia decides to keep her anyway as a show of strength and getting past the previous events, but things begin to escalate even further.  After Mia is attacked by a demonic entity in the basement of their new apartment complex, she and John seek out the aid of Father Perez (Tony Amendola), who agrees to take the doll to the church.  His attempt results in him being injured as well.  With no one else to turn to, Mia begins researching with the help of a friendly bookstore owner named Evelyn (Alfre Woodard).  It turns out that the actions performed by Annabelle and her boyfriend were an attempt to conjure up a demon, which now intends to take Leah's soul in order to become part of our realm.

Faced with this, Mia must now make decisions as to what path she will take to save Leah.

It must be said that, though The Conjuring purports to be based on true events, everything in this movie is completely fictional.  The true origin story of the doll is much different, and this is meant simply to tie into the first movie, as well as make a fast buck.  Truth is, it's not that bad; it's just that about everything here has been done before.  When watching this you will automatically be reminded of dozens of better horror films.

It does have a couple of tense scenes, particularly the one in the basement - which, unsurprisingly, was directed by James Wan without a credit.  Annabelle herself is creepy, but the Fords are relegated to worried mother and disbelieving husband, while the bookstore owner plays the black mentor part.  It's a movie put together with all familiar pieces, and no modern veneer is going to be able to mask it.