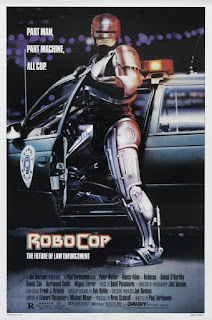 At the time that RoboCop came out in 1987, Peter Weller was largely known for the cult movie The Adventures of Buckaroo Banzai Across the 8th Dimension.  Honestly, Arnold Schwarzenegger, who already a hit playing a similar cyborg (albeit evil) role in The Terminator, was among the actors first considered for the role of resurrected Detroit police officer Alex Murphy.  Like most casting choices after the fact, I have hard time imagining any other actor playing RoboCop other than Weller.

There are many pieces that come together to make this a classic film: Paul Verhoeven's frenetic directing, the over-the-top violence and the underlying satirical edge.  However, both in this and the first sequel, it is Weller that keeps things together, expressing a humanity that can't be submerged by either programming or corporate malfeasance.

RoboCop is also the kind of movie that could have come out of the time it did, which makes any attempt at a neutered remake laughable.

Officer Alex P. Murphy (Weller) is transferred from his cushy assignment to a crime-ridden precinct in Old Detroit.  Paired with Officer Anne Lewis (Nancy Allen), one of their first calls is to respond to a bank robbery committed by a gang led by Clarence Boddicker (Kurtwood Smith), who has made a living running drugs and prostitution in the city.  With backup failing to arrive, Murphy and Lewis attempt to arrest the gang on their own, which results in Lewis being incapacitated and Murphy being killed.

Only, there still seems to be enough of him for the police department's corporate owners, Omni Consumer Products, to use as their new experiment in law enforcement.  After a spectacular failure of the Enforcement Droid 209, a project headed by OCP's second-in-command Richard Jones (Ronny Cox), up-and-comer Bob Morton (Miguel Ferrer) convinces the company's head (Dan O'Herlihy) to go ahead with the RoboCop project.  His idea is that a former officer be changed into an indestructible cyborg capable of clearing the streets of Old Detroit of crime - and, also, clearing the way for it to be safe to move workers in to tear it down and replace it with a new development called Delta City.

What's left of Murphy is used, successfully, in the project.  Only problem is, his human memories begin to override his programming, leading to him dreaming about his murder.  After he encounters Boddicker's henchman Emil (Paul McCrane) while attempting to stop a robbery, he starts putting the pieces together and goes after Boddicker himself.  In order to save his own life, Boddicker gives up Jones as his true boss.  RoboCop then attempts to arrest Jones, but finds out that a secret program prevents him from arresting, or harming, any of OCP's executives.

To get rid of Murphy, Jones sends the ED209 after him, as well as a good portion of Detroit's police force.  He is rescued by Lewis, who had recognized him immediately.  As he heals, and more of his memories return, he and Lewis prepare for the oncoming battle with Boddicker's gang.

This is one of the few movies where I prefer the director's version more.  Keep in mind, we're talking seconds, not 20 minutes or more of extra footage that does nothing to push the story along.  However, those seconds count, largely because they show in further detail the executive's death in the boardroom and the extent of the torture Murphy goes through before he is killed.  One is hilarious satire on '80s action films, while the other further humanizes the main character.  Verhoeven knew what he was doing (which is something I cannot always say about his movies), and the trimming he had to do for an R rating at the time did change the tone of those scenes quite a bit.

Happily, it never changed the tone of the movie, so it's still as enjoyable today as it was three decades ago.  Weller manages to make us care for a character whose face is covered most of the movie, while Kurtwood Smith puts in the kind of villain performance that Marvel really needs to incorporate in its ongoing movies if they want to make things interesting.  On top of that we also get superb performances Ronny Cox and Miguel Ferrer as they both jocky for position and favor at OCP.

Special mention should also be made that, while she's not in much of the film other than the beginning and end, Nancy Allen manages to bring realism to a female police officer rather than being there for simple sex appeal.  Any idea of a relationship between Murphy and Lewis died on the drawing board, and the movie is much better for it.

I know that parts of the movie can be picked apart after all this time, but it was low budget even for the 1980s and was never meant to be taken too seriously.  It also ends right where it should, and should have stayed that way as well.  The sequel isn't too bad, but after that the series became more kid-friendly, and RoboCop, the character, has never recovered from that.  The fact that the original movie still manages to stand out despite this is a testimony to what inspired film making can do.