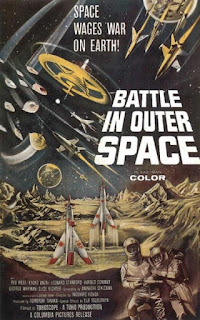 Toho Studios is largely known for monster movies, specifically Godzilla and all his brethren.  These are the movies that got played constantly when I was a kid on Saturday mornings.  Yes, I watched some cartoons, but the highlight of the day was seeing a giant lizard stomp all over Tokyo.

While the original Gojira and a few of its immediate sequels were serious (as well as some of the other members of the menagerie), they got sillier as the 1960s went on.  Silly even to the point that most of the other output of Toho, including their go-to director, Ishiro Honda, was largely forgotten.

Big monsters may be one thing, but Toho made some good sci-fi films as well and, while I hate to admit it, they were ahead of Hollywood for a period when it came to special effects.  It's no surprise they decided to do an all-out effects movie like Battle in Outer Space.

In the near future an international space station is attacked by alien saucers, who then proceed to cause mayhem on earth by demonstrating how they can reverse the effects of gravity and destroy our ships and landmarks.  The world's governments gather in Japan's Science Center, and it is revealed that the United Nations has been secretly working with Japan to build two space ships, known as SPIPS, in order to deal with alien threats.

Meanwhile, it turns out the aliens, which hail from the planet Nadal, also have the ability to plant remote control devices in humans and force them to obey their commands.  This is revealed when Dr. Achmed (Malcolm Pierce), one of the attendees at the conference, tries to destroy a newly developed heat ray that is intended to be used against the invaders.  Achmed fails, but the aliens manage to plant a controller on Iwomura (Yoshio Tsuchiya), who is one of the crew chosen for the space ships.

The aliens have taken up residence on the moon, and the ships are sent after them.  After overcoming a wave of space torpedoes and saucers, the alien voice informs them that their trip is useless, but they persevere, landing their craft and heading for the alien base.  Iwomura, after attempting to disable to the ship's weapons during the previous battle, is left behind and restrained while Maj. Ichiro Kastumiya (Ryo Ikebe) leads the crews of both ships on an assault.  The mission succeeds, but Iwomura manages to escape and blow up one of the ships before the crew returns.  However, freed from the alien influence, he helps hold off the invaders as the remaining members of the team head back to Earth in the surviving ship.

The aliens, however, are not done yet.  The mothership leaves the moon with its remaining saucers and torpedoes for an attack on Tokyo.  It is now up to the United Nations, and especially Japan, to keep humanity from becoming slaves.

There is so much in this movie that predicts how Hollywood cinema is these days.  The effects are impressive for the time, although as usual many of the buildings for the miniatures are flimsy cardboard.  The sets are decent, even if the moon looks more brown than grey.  There is also some detail spent in making the space battles (and space maneuvering) look as realistic as they could at the time.  Unfortunately, this is contrasted with "weightlessness at convenience" aboard the ships.  They walk around as normal, and objects stay put, even though they make a point (for humor sake) of having one crew member go flying up suddenly when he forgets there is no gravity in space.

There is also the whole idea of reversing gravity by creating extremely low temperatures, which is apparently how the aliens do it.  Even a small amount of knowledge in physics makes that whole scenario laughable.

The other problem here is that there is really no one to care about.  You know Iwomura will be redeemed in the end, and the rest of the cast is just stock characters.  The effects are the star, which is good, because in the end you will spend more time laughing at this movie for about every other reason.