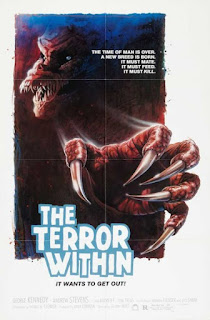 I sometimes have to wonder what happened to Roger Corman in the '80s and '90s.  By his own admission, he really never looked at movies as art, but as opportunities to make money.  He would seize on any trend, often making thinly-veiled remakes of more popular movies just to turn a buck.  More often than not throughout his career it worked.

After a release of a biological warfare agent kills or mutates 99 per cent of the population, only scattered survivors roam the land, with most holed up in government labs.  There is a vaccine, but really nobody to administer it to.  Those who do remain above ground fall victim to "gargoyles," virtually unstoppable mutants that do nothing but kill and reproduce.


The Mohave Lab is run by Hal (George Kennedy), who sends out David (Andrew Stevens) and Sue (Starr Andreeff) after two other lab members die while on survey.  They find a the two members dead, as well as the remains of a human camp that has fallen under attack as well.  The lone survivor is a young woman named Karen (Yvonne Saa), who they bring back to the lab and discover is three months pregnant.

The lab itself is attacked from the outside, but that doesn't turn out to be the big problem.  The baby Karen is carrying is maturing quickly, and an attempt by their doctor Linda (Terri Treas) to remove it results in the fetus doing its best chest-burster imitation and heading for the air vents.  It quickly grows and begins killing and, in the case of Sue, decides she is going to carry its child.

Since she has been sleeping with David, he and Linda assume that the baby is his, but Sue is sure it is not.  She attempts to abort it herself, resulting in the fetus tearing her up inside before dying.  After Hal and the rest are killed, David and Linda must find a way to stop the gargoyle and escape the facility.

The acting is horrendous, the creature is merely a guy in a horrible suit growling, and everything else is lifted from both Alien and The Thing.  It is hard to believe that anyone was doing this for a paycheck, but if they did I hope they were able to get to the bank and cash it before the check bounced.

Maybe this was one of the movies that somewhat convinced him that his time a master of schlock was over, as it made under a million dollars at the box office, and I barely remember it being on the video shelves.  Not only is it boring and unnecessary, but it makes me sad that he was losing touch with his audience.