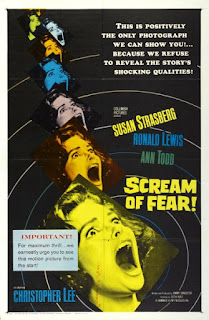 Hammer is well-known for its adaptations of the old Universal horror menagerie, often featuring Peter Cushing and Christopher Lee.  There is a certain type of style that one typically expects from the studio, from Gothic settings to lurid sexuality.  Occasionally one of their movies bucks this trend.

After her companion dies in a freak swimming accident, Penny Appleby (Susan Strasberg) accepts an offer from her estranged father (Fred Johnson) to visit him at his estate in Nice.  She is greeted by his handsome chauffeur Robert (Ronald Lewis) and her stepmother Jane (Ann Todd).  Penny never really knew her stepmother, nor did she approve of her father remarrying, but she does her best to get on.

Despite his invite, Mr. Appleby is away on business when Penny arrives.  Jane has a room set up for her in her father's den, and makes the house as friendly as possible.  Penny was thrown from a horse a number of years earlier, breaking her back and confining her to a wheelchair.  This proves a problem when she sees a light in the summer house that same night and, investigating, finds her father's corpse.  Distraught, she falls into the disused swimming pool on the way back to her room.

Rescued by Robert, she is treated by her father's friend Dr. Gerrard (Christopher Lee), who, sense no one else could find a sign of the corpse, becomes concerned about her mental state.  Things seem to calm down but, once she sees her father's corpse again in her room, she finds an ally in Robert, who has found evidence that things may not be as they seem.  It appears that her father may have died in an accident and, since the will provides Penny with everything unless she dies or is proven mentally incompetent, it appears that Jane and Dr. Gerrard may be working together to see that the latter happens.  Penny and Robert work to gather evidence, as it may be possible that Penny is in greater danger than she appears.

This does have some similarities to Gaslight, but the whole "drive a sane woman crazy" plot is about it.  There is quite a lot going on here, and very little I can say about it without ruining a perfectly good movie.  Suffice it to say that Christopher Lee's praise of both this movie and director Seth Holt are well placed, and all the main actors do well.  Of course the corpse itself is real, so there's no ghost here, but the lengths the villains go to make for a perfect suspense film.