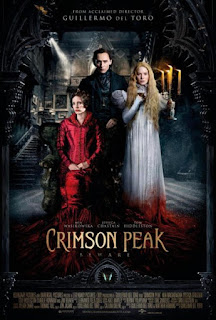 In many ways I am getting frustrated with horror fans, and movie fans in general.  I know I shouldn't, because really it's nothing new.  It's the reason why you will always see more Transformer movies and Marvel sequels than you will see big budget horror.

I learned quickly when I started doing an internet radio station a sad, sad fact: as much as people talk about wanting variety, they do not.  People want variety only to the point that they hear, or see, what they want.  It's the reason that we still have a two-party system in the United States, why you hear the same songs over and over again on the radio and why it seems, especially in horror, that you are seeing the same movie again and again.  People demand something different and, when it's given to them, they find some excuse to be unhappy about it.

I will not say that Crimson Peak has the most original plot, nor is it particularly frightening after the first few times the ghosts appear.  It is, however, in its own way different than movies it is similar to, and definitely different than much of what is currently out there.  But, unfortunately, people stayed away in droves.

Edith Cushing (Mia Wasikowska) is the only daughter of wealthy construction magnate Carter Cushing (Jim Beaver).  She is an aspiring writer and outspoken socialist.  Despite her views on the aristocracy, she soon becomes enamored of Sir Thomas Sharpe (Tom Hiddleston), who along with his sister Lucille (Jessica Chastain) own Allerdale Hall in Cumberland, England.  Though rich in title, the Sharpes are cash poor, and Thomas's various attempts to get funding to build a machine to reopen the family's clay mines, and thus reclaim their fortune, have failed.  In a last-ditch attempt he makes a plea to Carter, which is soundly rebuked.

Carter takes an immediate dislike to both Sharpes, a feeling that seems to be shared by his physician Dr. Alan McMichael (Charlie Hunnam), who is himself in love with Edith.  Mr. Cushing hires Mr. Holly (Burn Gorman), a private detective, to find out more information about the Sharpes.  What he does find out leads him to cut them a check with the express orders that they depart and that Thomas "thoroughly" breaks Edith's heart.  He does so, but includes a letter explaining the situation when he returns her manuscript, causing her to come after him, only to find him supposedly gone.  Rather, he has sent Lucille back to England and remained behind to pledge his love to Edith and ask her father's permission to marry.  Unfortunately, Carter Cushing is murdered by an unknown assailant.

With the family fortune passing to Edith, she marries Thomas and moves to England.  Allerdale Hall turns out to be a crumbling mansion, sinking into the very red clay that once fueled the family's fortunes.  With her money Thomas builds a working version of his machine.

Problem is, Edith sees ghosts.  When she was a child, her mother's spirit came to her and warned her that, when the time came, to beware of Crimson Peak.  It turns out that it is the nickname for Allerdale Hall, as the red clay seems to bleed through the snow in winter.  The mansion itself is also haunted by a variety of ghosts that endeavor to lead Edith to the truth of the danger she is in - a truth that Dr. McMichael is able to deduce, and he sets off for England to rescue her at any cost.

If you have seen The Innocents or The Haunting then you can probably guess where most of this is going, doubly so if you are like me and have read a number of the novels these movies are based on.  Director Guillermo del Toro is not in any way trying to do anything new with the genre, but is rather attempting to put his own spin on it.  He quite succeeds, especially with the set design of the mansion and the way the ghosts appear.  He has reimagined them in a way that is uniquely his style.

Since the haunted house story (as well as the lover betrayed story) has been done over and over, you want to see what direction it takes and how the performances are handled.  The three leads are great, with the tension building as to what action Thomas will ultimately take, and where his loyalties actually lie.  Jessica Chastain portrays Lucille with a chilly grace that barely conceals an unstable fire beneath.

Mia Wasikowska, on the other hand, may be why many had a problem.  She is built up as a strong heroine, but this is absent largely until the end. It is obvious that she knows what is happening to her, but her supposedly strong will is absent and she seems willing to let it happen.  Most of the time she is just there.  Charlie Hunnam is one-dimensional in this, no more than a plot point that can't figure out what accent he should use.

I quite enjoyed this latest film from del Toro, as I have enjoyed most of his films.  Hopefully he decides to keep going for smaller pictures, because he often shines when he does them.  Although it would be nice to some day see his version of At the Mountains of Madness come to fruition.