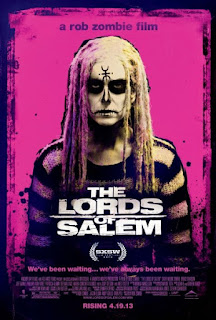 One thing you have to hand to Rob Zombie is that he has a knack for finding actors and actresses that Hollywood has left behind.  He must have some great connections, and this is probably due in large part to The Devil's Rejects.  The sequel to The House of 1000 Corpses proved that Rob Zombie could make a real movie, and even have original content even if it was heavily reverential to its influences.

I have not seen either of Zombie's Halloween films, not for lack of interest but due to the usual: I don't buy DVDs that often because I tend to watch them once before they take up space, no matter how much I love the movie.  I also don't order DVDs from Netflix because they tend to get lost in the shuffle as well.  That same situation kept me from seeing The Lords of Salem, since it was barely in the theaters when it came out and, for some reason, most of Zombie's movies are not available in streaming format.

It is a shame, because I am sure more people would want to see his movies, and that having them in a streaming format would alleviate some of the problems he has with theatrical distribution.  The Lords of Salem, though similar in tone to H.P. Lovecraft as well as several Hammer and Tigon films, happily maintains many of the things that made The Devil's Rejects enjoyable, even if it tends to go off track a bit at the end.

Heidi Hawthorne (Sheri Moon Zombie) is a local disc jockey known as Heidi LaRocq who is part of a popular trio that includes her on-again, off-again lover Whitey (Jeff Daniel Phillips) and smooth-voiced Herman (Ken Foree).  She lives in a small apartment in Salem, Massachusetts, with her dog, and attends meetings due to a previous bout of drug addiction.  Her life seems to be mostly fine until the radio station receives a package for her: a new record by a band called the Lords, packed inside a wooden box.

After spending a night listening to music with Whitey, they decide to put the album on.  Whitey attempts to play it, only to have the needle skip across.  Heidi has no problem, and what comes out is weird, primitive, dissonant music that seems to hypnotize her.  That night, she begins to have strange dreams, and appears to be followed by the apparition of a witch named Margaret Morgan (Meg Foster).

The following day Francis Mathias (Bruce Davison), a researcher for the wax museum, appears on the show to talk about Salem's history of witch trials.  While there, the trio decide to play the Lords' song to decide if it is going to get regular airplay.  The result as it goes over the air is that a number of women, like Heidi, are suddenly hypnotized by the music.

As the dreams intensify, Heidi's mental state deteriorates, and she falls more and more under the influence of her landlord Lacy (Judy Geeson) and her sisters Sonny (Dee Wallace) and Megan (Patricia Quinn), who seem to know more about what is going on with Heidi than they originally let on.  Meanwhile, Francis's research turns up that, as Margaret Morgan was executed, she put a curse on the village and on the Reverend John Hawthorne, who had brought her to justice, and who happens to be Heidi's ancestor.

As the date for a performance by the mysterious Lords approaches, it appears as if Margaret's curse may yet be fulfilled.

I must get something out of the way.  One of the first things that might make someone think twice about seeing this movie is that Rob Zombie gave his wife top billing.  Previously, a little bit of her "acting" has gone a long way, and it is obvious that he continues to cast her because his films, to be honest, are largely vanity projects.  He has had a successful music career for almost three decades, and I get that he likes the world to see his wife in various states of undress.  The good news is that at some point he seems to have got her acting lessons.  This particular role calls not for the frenetic childishness she brought to Baby Firefly, but a more understated performance as a normal person whose life has suddenly spun out of control.  She does a great job in this film.

I also really appreciate that Rob Zombie largely did not overload the audience.  He has a tendency to do that, both in live performances and in past movies, frontloading so much that there is not much room to keep going forward.  The Lords of Salem is a slow burn like the Hammer films that inspired it.  I know this was a stumbling block for a number of people who thought this would be constant scares, but these movies have always been more about atmosphere and a shocking ending, not about constant blood on the walls.  Many of the more outrageous scenes turn out to be dreams or hallucinations.

The one problem is, after great performances from horror veterans and his wife, he can't help but just really go over the top at the end.  It's as if he thought maybe his audience would consider that he was getting too soft, and so some of the events leading up to the end look less like a movie and more like a Rob Zombie video.  It's sad, because the ending shots and the use of the Velvet Underground's "All Tomorrow's Parties" is much more striking than all his pyrotechnics.

It would be refreshing to see him go for something completely original rather than constantly referencing previous films, but so far most of Rob Zombie's output has been quite interesting if sometimes greatly flawed.  Here is hoping that he decides to truly break the mold with something in the future, because I'm sure he has it in him.