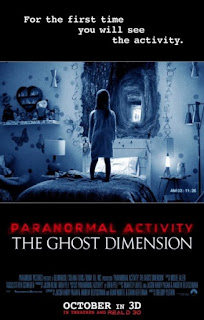 Franchises can get old rather quick, especially when you stretch out the main plot over five movies when, truthfully, there was barely enough for two.  However, this series got a bit of a shot in the arm with an episode that was not a direct sequel in Paranormal Activity: The Marked Ones.  It had surprisingly great performances and, though related to the main story, managed to stay on track and finish it in one movie.

With The Ghost Dimension, we are back to the main plot of a demon named Tobi and the mysterious doing of a cult of witches called the Midwives.  Problem was, part four was once again going over the same territory, with creepy children and things going bump in the night.  It was getting more than a little ridiculous sitting through a buildup when you already knew what was coming, and this time around it didn't really add anything. Much of that problem is remedied this time around.

Ryan (Chris J. Murray) and Emily (Brit Shaw) live in an inexplicably big house with their daughter Leila (Ivy George).  Also living with them is Emily's sister Skyler (Olivia Taylor Dudley), who also helps out with Leila.  Ryan's brother Mike (Dan Gill) comes to visit for the holidays and, while putting up decorations, Mike and Ryan find a box of videotapes along with a vintage video camera.

They get the camera working, and find out something shocking: something else is dwelling in the house with them, and the camera can actually pick it up.  Curious, Ryan begins watching the tapes, which show the sisters Kristi (Jessica Tyler Brown) and Katie (Chloe Csengery) and their family, most of which was scene in the third installment.  It also shows what happened after their parents died as they were brought up by their grandmother, a member of the Midwives, and a man named Kent (Don McManus) who appears to be training Kristi to see through Tobi's eyes.  In this case, she begins to describe Leila's room.

It turns out that Leila shares a birthday with Kristi, and the cult needs Leila to provide blood in a ritual to give Tobi solid form.  To do so they use Kristi to open up a portal from 1988 to 2013.  Rather than sit idly by, Ryan, Mike, Skyler and Emily enlist the help of Father Todd (Michael Krawic), the only priest who would take their case.  He has a plan to exterminate Tobi once and for all.

Paranormal Activity: The Ghost Dimension was widely panned by critics and many audience members, largely because it did finally show what was happening rather than just hint at it.  It is obvious that this was done as an excuse to release the film in 3D, but despite the naysaying, it is much better than the fourth installment.  If we were going to just stick with hints and imagination, then they should have just done the first movie and had done with it.

The performances, and logic, are no better or worse in this than it was in the other episodes.  My only problem is, since this is supposed to be the last one, it still doesn't provide much closure.  Also, by the end, it's going down the well-worn path of the others, only this time you can see what is happening to the people when the demon attacks.  There were many chances for the film to just end at a certain point that would have left viewers with a sense of dread, but they chose once again to go out with a bang than to end quietly.

I guess that, even though it was time to show the demon, there was still some aspects that should have been left to the imagination.