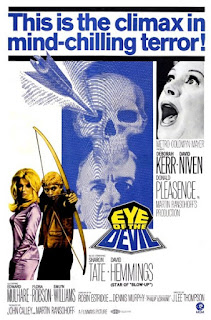 This is an example of a production that went through the wringer.  It had been in the planning stages since 1964, and was actually finished and ready for release in 1966, but for some reason it was shelved.  That's why you may be wondering why it says this film is introducing Sharon Tate, when you are sure a movie with her came out before this. It turns out this was made first, but it took some time to come out.

Another thing that delayed it was that Kim Novak was supposed to be the female lead.  She largely did film her parts for the movie, but was injured when she fell off a horse, leading to her being replaced by Deborah Kerr and all that filming having to be done again, only to have the film shelved.

Whatever the reason it finally got released (most likely because David Hemmings had just got some major notice with Blow-Up), it is good that it was, even if it is another typical "aristocrats in a castle with a secret" movie.

Philippe de Montfaucon (David Niven) is called back to his ancestral estate in the small town of Bellenac.  It turns out that, for the third year in a row, the crop of grapes has failed due to drought conditions.  Since winemaking is really the only enterprise for the town, it's a disaster that he must attend to.

His wife Catherine (Kerr) wants to go with him, but he informs that it is not a good idea for outsiders to be in Bellenac during a crop failure.  Despite this, she packs up her son Jacques (Robert Duncan) and daughter Antoinette (Suky Appleby) and heads to the village to be with him.  The Countess Estell (Flora Robson) tries to warn her off, but to no avail - even after a frightening encounter with Odile (Tate) and Christian de Caray (Hemmings).

Odile seems to be a witch of sorts, while Christian is known for his hunting skill with his arrows.  Their family, in fact, has hunting rights on the estate going back centuries.  Despite being a witch, Odile seems to be in league with the Pere Dominic (Donald Pleasance), the local priest, and attempts at his behest to scare Catherine away.  This results in Catherine almost being killed.

She is also not too happy to find that rituals, involving groups of men in hoods, are going on at the castle as well - rituals that seem to be reflected in ancestral paintings and referenced in the family's tombs.  The more she finds out, the more she realizes not only her life (and Philippe's) may be in danger, but the village may have plans for Jacques as well.

This was made at a time when the American International and Hammer Horror flicks were all the rage, so it is not a surprise that a major American studio would use its budget and star power to to up the ante.  Largely it works, although seeing it these days it may end up getting unfairly compared to The Wicker Man, since it has some similar themes of hidden paganism in modern Europe.  Eye of the Devil beat it by a fair number of years, and takes itself way more seriously than The Wicker Man ever did.

Donald Pleasance is reservedly evil through most of his, while Deborah Kerr acts appropriately concerned about what is happening to her family.  The character of Catherine is a frustrating one, as it follows the usual trope of a woman getting in trouble because she didn't listen to her husband.  All of her prying really does nothing to solve anything.  David Niven, for his part, gets to mope around a bit, but is not given much to do outside of taking a riding crop to Sharon Tate.

And that brings me to the two most memorable characters in the whole thing, although they are just bit parts and have few lines.  Tate and David Hemmings are two impossibly beautiful, ethereal twins, with a wrongness about them that makes both effective whenever they are the screen. By wrongness, there is no hint of incest, but more of a hint that they are avatars of the hidden paganism that permeates the village.  It's almost as if they are a part of the land, but not part of the people that work it.

Eye of the Devil does not really rise above other movies of its same genre, but it is nice that it did get released and that it is out there to be enjoyed.