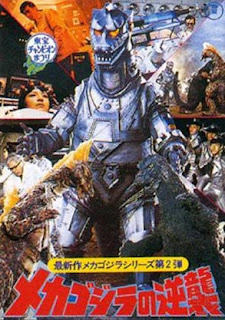 Godzilla, after 21 years, had come full circle from an angry force of nature awakened from the deep by nuclear bomb tests to a defender of the earth.  Aliens, supervillains, corrupt government officials and a virtual menagerie of monsters had attempted to bring him down.  They all failed, although Mechagodzilla came pretty close.

After the events of Godzilla vs. Mechagodzilla, those pesky aliens from the third planet of the black hole are back again.  Scientists pilot a mysterious submarine to find the remains of Mechagodzilla, only to be attacked by Titanosaurus, an aquatic reptile that had been theorized by Dr. Shinzo Mafune (Akihiko Hirata).  His theories about the monster, and attempts to control it, got him thrown out of the institute in which he worked.

Biologist Akira Ichinose (Kastuhiko Sasaki) and Interpol Agent Jiro Murakoshi (Katsumasa Uchida) attempt to find the doctor, only to be told by the doctor's daughter Katsura (Tomoko Ai) that the doctor had died.  Truth is, the doctor is in league with Alien Leader Mugal (Goro Mutsumi), who saved Katsura's life by turning her into a cyborg.  Her transformation also made it possible for Mafune's attempts to control Titanosaurus to be successful, and now the aliens want him to do the same with a newly rebuilt Mechagodzilla.

Eager to prove himself right, Mafune pits Titanosaurs in a battle against Godzilla, which results in the former fleeing, but the point made.  The aliens ultimately plan, after destroying Godzilla, to use the same technology to control other monsters and destroy all the major cities of Earth, starting with Tokyo.  As usual, Godzilla is there to save the day, resulting in a three-way battle between the monsters.

Terror of Mechagodzilla brings the original series of movies to a close, after reaching a number of highs and lows.  Ishiro Honda is back directing, and this makes the fight scenes some of the best.  It is in fact one of the better Godzilla films that features him as a good guy.

There are still many problems.  The silly get-ups the aliens wear is laughable; they should have just stuck with the wraparound shades.  The dialogue, at least in the dubbed version, is laughably awful.  I don't know if this was done on purpose, but I would like to see the subtitled version so I could know if this was actually the real script.  In the past there have been some major differences in tone when it came to the Japanese versions of these movies, and I have a feeling that may be the case here as well.

The story has been done to death, but at least the original Godzilla retires with a bang.  Hopefully Titanosaurus makes an appearance again sometime in the future, as it is a pretty decent design, even if he doesn't breathe fire.