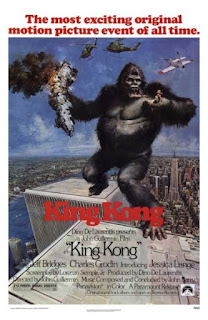 "I not give you crap."  So said producer Dino De Laurentiis when promoting his 1976 remake of King Kong.  The original had become a classic, not just in horror and science fiction, but film-making in general.  When you watch the 1933 original today, it is just as exciting as when it came out 83 years ago.  Although Peter Jackson's version is nowhere near as good as the original, he had the vision of placing it in the same time period, and making Kong both vicious and sentimental.

De Laurentiis's Kong is practically a suave lady's man, and the sentimentality is slathered on like frosting.  No subtlety, no trust that the audience may get the subtext.  It is almost as if the script was written by a giant ape with a couple head wounds.

Fred Wilson (Charles Grodin) is an oil executive for a company called Petrox.  Along with his scientist sidekick Bagley (Rene Auberjonois), he sets sail for a mysterious fog-enshrouded island that he is sure is rich with oil, as well as uninhabited.  Jack Prescott (Jeff Bridges), a paleontologist, thinks the high carbon dioxide levels in the fog point to a large animal exhaling.  He stows aboard the ship in order to reach the island.

Fred initially thinks Jack is a spy for a rival oil company, but his true identity is revealed after he aids in the rescue of Dwan (Jessica Lange), a young actress adrift on life raft after the yacht she was on exploded.

The ship reaches the fog bank and, sure enough, an island lies behind it.  On it, the explorers find a giant wall and a primitive native population that is preparing a sacrifice.  They are spotted, and their chief (Keny Long) confronts Fred and Jack, demanding that Dwan be turned over as a sacrifice, going so far as to offer six of his own women for her.  Jack refuses, and the other men fire guns into the air.  This does not frighten the natives for long, as they kidnap Dwan from the boat later that night.

Noticing she is missing, Jack organizes a rescue party, to which Fred also assigns a survey party to continue oil research on the island.  Meanwhile, the natives offer Dwan to Kong, who gladly accepts and takes her home to his cave, where he does his best to woo her.

Most of the rescue party dies in the attempt to rescue Dwan, but Jack perseveres and leads her away while Kong fights a giant snake.  Discovering that the oil on the island is useless, Fred hatches a plan to capture Kong and bring him back to the United States as an attraction sponsored by Petrox.  He succeeds, but on opening night Kong gets concerned when he thinks Dwan is being attacked.  After breaking out of his cage he rampages through New York, trying to find her, and ultimately fighting for his life on top of the World Trade Center.

There are some terrible special effects in this movie, and I mean terrible even for the 1970s.  Many of the effects from the original look better.  However, when money was spent, it is evident.  The suit, and especially the masks used, are beyond what was used in Planet of the Apes seven years earlier, and the mechanical hands are quite convincing.  There was even a 40-foot mechanical Kong built, but for all the expense and effort, it appears only briefly in the film.

Another complaint is the rescue.  In both the original and Peter Jackson's version, the quest to find Kong is more dangerous than a simple log.  There are giant bugs and charging dinosaurs.  I guess they spent all their money on Kong, because the only other monster that shows up is the giant snake, and that is a stand-in for the Tyrannosaurus.

Jessica Lange is a great actor, something she has proven time and again through the first four seasons of American Horror Story.  It is disappointing that she is given such horrible dialogue to spout here.  She does her best, but she and the other actors are given lines that George Lucas would reject.  Again, it is obvious that much of the thought for this movie went into designing the monster rather than making a good movie.  Fay Wray even ducked doing a cameo because of how bad the script was.

Even the original film makers, when they made Son of Kong, could not touch the original.  Peter Jackson's film, for all its flaws, came the closest, but this version serves only as a curiosity and a reminder that unnecessary, horrible remakes are not just something that has popped up in the last 15 years.