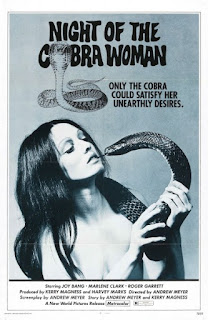 When I saw that one of the actresses in this movie was named Joy Bang, I got concerned that this movie was going to end up with me spending a night on the couch.  While it does have some nudity and sexual themes, I found out that falling asleep on the couch was a much more likely scenario.

Lena Aruza (Marlene Clark) is a nurse in the Philippines during World War II.  She is out exploring with a friend when she finds a cave, which contains a cobra with a particular diamond shape on its throat.  She is bitten by the cobra, and instead of dying, transforms into a creature of immortal beauty.  She is also able to use the venom to save her friend's life after she is raped and shot by a Japanese soldier.

30-some years later Joanna (Bang) is a UNICEF worker in Manila, assisting Dr. Tezon (Vic Silayan) with his venom research.  She hears about the firebrand cobra, a species thought to be extinct, but that a mysterious woman in a small village might know where to find them.  She seeks out the woman, only to find her caretaker Francisca (Rosemarie Gil) and her mentally deficient son Lopé (Vic Diaz).  Joanna interprets Lopé's attention as an attack and flees.

Joanna's boyfriend Duff (Roger Garrett) comes to visit, and she tells him the tale.  He purchases an eagle from a market, and determines to go seek the snake woman out himself.  He finds out from Francisca that Lopé's state is due to sexual congress with Lena.  Upon meeting Lena, Duff is taken despite Francisca's warning.  She is living with the snake that bit her, named Movini.  It turns out that whenever the venom does not work or is in short supply she takes the life essence from men by making love with them, and this begins to happen with Duff.

Meanwhile, Joanna has also shown up at Lena's dwelling, determined to steal a sample of the venom.  She does, and is attacked by Movini.  She releases Duff's eagle, which kills the snake, but is himself killed after eating a poison mango.  Joanna returns with the venom to Dr. Tezon, and they begin experiments on monkeys, finding out that rather than immortality, they begin to age once the venom's effects wear off.

Both Lena and Duff begin to experience the same problem, since with Movini dead the venom is no longer available.  Lena has a solution: giving into the full transformation from human to snake, so she can become Movini and provide the venom necessary to keep Duff alive.

It's about as typical a movie about reluctant shapeshifters as you can get with a little bit of a sexual subplot, which of course is made the focus of the posters.  Like most movies of its time it is nowhere near as exploitative as you would be led to believe.  Instead, it is full of stiff performances and little in the way of plot development or excitement.  It may be a curiosity to those who enjoy Filipino genre films, but there is much better than this.