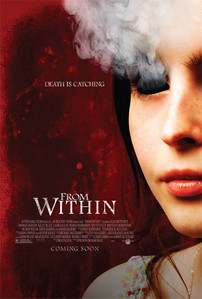 I think I could go on forever about how much I hate Twilight and anything to do with it.  There were many things that tainted horror in the 2000s, and that movie was one of the worst.  Suddenly sad-eyed emo boys were filling the screen, trying to fulfill 16-year-old girls' bad boy cravings - cravings they would inevitably regret a few years later, just like the albums by the boy band they liked when they were 13.

It is too bad that From Within falls within this category, as it did try to so something original.

Lindsay (Elizabeth Rice) is a good Christian girl in Grovetown, Maryland.  She is dating Dylan (Kelly Blatz), the son of the local pastor of their megachurch (Steven Culp).  In fact, the entire town revolves around the church, and outsiders that do not want to participate are not welcome.

One of these outsiders is Paul (David Arniello), who is secretly off with his girlfriend Natalie (Rumer Willis).  Paul commits suicide in front of her.  Soon after, she runs into her father's store, covered in blood, claiming she is being followed.  Shortly after, she commits suicide herself, followed by her father and others.

Lindsay's mother Trish (Laura Allen) and her boyfriend Roy (Adam Goldberg) are none too happy that Paul and his brother Aidan (Thomas Dekker) have returned to town, as their mother was accused of witchcraft and died in a fire near her home.  Since Aidan also refuses to be part of the church, he is attacked by Dylan, but Lindsay comes to his rescue.  This leads to her becoming suspect as falling away from the church.

Aidan reveals that Paul got the spell from his mother's grimoire, and did it to avenge her death.  Aidan claims that the fire was set deliberately when his mother was blamed for the death of a local boy.

Lindsay grows closer to Aidan, and Dylan grows more furious with his father for not doing something about the boys.  In order to "save" Lindsay, she is kidnapped and forced into an exorcism.  However, Trish, who had witnessed one of the suicides, kills herself in front of Lindsay, passing on the curse.  Aidan and Lindsay must now retrieve the grimoire so they can undo the spell, as there is no telling to what lengths it may spread, and Aidan finds himself reluctantly falling for Lindsay.

The doppelgangers that come for the victims are reminiscent of Asian ghosts, and the idea of a dangerous spell unleashed is intriguing.  Unfortunately, as stated before, we have the emo anti-hero that the heroine falls for.  The love story seems shoe-horned, and it would have been better (and made the pastor's son look worse) if there was really no attraction going on.

It is also too bad that the townspeople are all portrayed in one dimension.  It is the typical backward, redneck, gun-toting religious nuts that exist largely in the fears of East Coast intellectuals and hack writers.  They could have been zombies for all it was worth, or a horde of vampires, or any rote mob.  No matter what, it is just lazy.

I think that is what sums up this movie.  Someone came up with a great premise, but was too lazy to do anything truly creative with it.