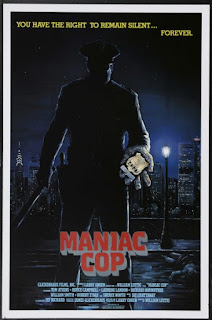 One thing I have always admired about Larry Cohen is that he often, often-times without a permit, filmed his movies on the grimy streets for New York.  And by grimy, I mean the Death Wish version of New York, where there is constant danger around every corner and citizens just seem to be going their lives avoiding whatever type of blind violence the city throws at them.

That is also what I remember when I first saw Maniac Cop back in the early 1990s.  The film was low-budget, and the video transfer seemed to be even more so.  So much that I forgot that this was made so late in the 1980s.  For the longest time the cuts you would find on video made this look like a 1970s grindhouse flick.

Cassie Phillips (Jill Gatsby) is accosted by two Puerto Rican youths shortly after leaving her job.  She fights them, off but is pursued.  She sees a police officer and thinks that she is rescued.  Instead, the officer lifts her up by the throat and brutally snaps her neck.

The young thugs are initially charged with the murder, but detective Frank McCrae (Tom Atkins) does not think that they had the strength or any reason to do something so violent.  His interest is also piqued by them describing the murder being done by a large cop.  His superiors at first try to dismiss the idea, but more homicides are reported, with witnesses seeing a police officer involved.

The police commissioner (Richard Roundtree) tries to cover it up, but Frank goes to a media contact to leak the story.  As soon as it hits the news that a rogue police officer is murdering the citizens of New York, said citizens start taking the streets in protest and taking matters into their own hands.

Meanwhile, beat officer Jack Forrest (Bruce Campbell) is having an affair with vice cop Theresa Mallory (Laurene Landon), but his wife Ellen (Victoria Catlin) is receiving anonymous calls telling her Jack is the killer.  She follows him to seedy motel and discovers the affair, but runs into the real murderer on her way home.  Her body is placed in the hotel room, and the blame for the murders fall on Forrest.

McCrae again thinks they have the wrong man, and goes to talk to Theresa while she is on duty.  He arrives just as she is attacked by the cop, who survives multiple gunshot wounds, including shots to the head.  After some research, it turns out that the killer in question is Matt Cordell (Robert Z'Dar).  Cordell was a legend on the force, but his methods resulted in his incarceration.  He was murdered in prison, but appears to have somehow survived in an undead state, and is back for revenge against those whom he protected as well as those that put him in prison.

As the annual St. Patrick's Day parade approaches, it becomes clear what Cordell intends to do: murder the commissioner, the mayor and anyone else he can at the parade, and only Jack and Theresa can possibly stop him.

This was a peculiar mash-up for the time, as this largely plays as a police action film, with heavy stuntwork reminiscent of The French Connection and other similar movies from the 1970s.  Perhaps that is why it seems a bit older, despite the haircuts and the music.  It manages to successfully blend this type of movie with the slasher genre that was popular at the time.  Largely Cordell's face remains hidden except in flashbacks, and the makeup when we do see it is decently done.  Although Larry Cohen is the more famous name on here, it is William Lustig who directed this, and he does a fantastic job.

I also love some of the dark sense of humor present in this movie, especially with the victim who gets suffocated in cement.

Bruce Campbell also proves he can do a character other than Ash, as this is one of his first roles outside of a Sam Raimi film.  Raimi does appear as a parade announcer, so obviously there was a bit of a crossover going on there as well, but unlike a couple of different Cohens who collaborated with him, this does not look look like one of his films.

Tom Atkins looks and acts the part of the grizzled police detective, so perfect casting there, and Z'Dar is substantially threatening in and out of makeup.  The only real drawback is Laurene Landon, who is supposed to be the female lead, but can't read a line if her life depended on it.  She has a good scream on her, but that's about it.

I am glad that this and its sequel are getting some attention right now, although that always makes me afraid that someone is going to make a mediocre reboot at some point.  Let's hope not.  This is another one of those little flawed gems that makes '80s horror so much fun.