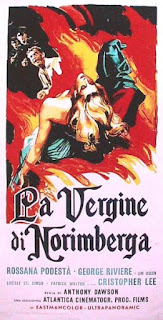 I am constantly amazed by the amount of material that has come from Italian cinema.  For an industry that, except for a few well-known names, has never achieved the prestige that France has, I am always discovering new films that have somehow slipped by everyone over the years.  Horror Castle, also known as The Virgin of Nuremberg, is one of those, and happily someone in the mid '00s saw fit to dig it up and restore it.

Mary Hunter (Rossana Podesta) is an American woman who has just moved with her German husband Max (Georges Revière) to his ancestral castle.  Three centuries prior the castle had been notorious for a man known as the Punisher.  Rather than a skull t-shirt, he wore a traditional executioner's hood and tortured women to death.  Many of the implements of torture remain in the castle, including the Virgin of Nuremberg, an iron maiden like device.  Also present is a statue of the Punisher.

Mary hears a noise downstairs and goes to investigate, finding a dead woman (Lucile Saint-Simon) in the Virgin.  In the morning Max tries to convince her that it was a nightmare, but she is still nervous, especially after meeting Erich (Christopher Lee), who used to be the manservant for Max's father.  Max tries to sedate her before leaving on business, but she puts the pills aside and goes exploring.

Outside the castle she runs into a fellow American, John Selby (Jim Dolen), who claims to be looking at castles in the area.  He runs off when the servant Martha comes to retrieve Mary, and it turns out that he is with the FBI, and is specifically investigating rumors about Max's family.

Martha informs Mary that she should stay in her room and keep it locked while Max is away.  That night she is attacked by the Punisher, who manages to damage her door and almost break in.  She is able to stab him, and realizes that it is not a ghost.  Initially believing it to be her husband, she goes out onto the grounds and sees Max and Erich removing a body.  She also sees the Punisher bring in a local girl, whom he proceeds to torture.

Mary faints, and finds herself in her bed.  Max promises to tell her everything if he will give him one more day to set everything straight, and explains that the dead girl was the one she saw in the Virgin, while the other woman was taken to a hospital.  She plies Martha for further information, but is refused.  She is simply informed by Max that she, and the rest of the staff, are to pack and leave immediately.  She attempts to do this with her servant Trudy, but finds that they are locked in the castle.

Meanwhile, Max also finds himself trapped in an underground cistern, unable to do anything while the Punisher murders everyone remaining in the castle and pursues Mary.  Erich, however, is able to meet with Selby, and together they set off to get the authorities before it is too late.  On the way, Erich reveals the secret they have been hiding.

The version I saw was the dubbed English one, with director Antonio Margheriti going under the alias Anthony Dawson, which often appeared on the credits outside of Italy.  He has long been one of my favorite directors, as his movies are not always great, but they often have a certain style about them.  This one is no different, even if the lighting and direction owe quite a bit to Mario Bava.

Largely it succeeds, with some great makeup and satisfying gore effects, even for the time period.  The problem is, the old European family with a secret has been done just as much as the silent, unkillable murderer in a mask.  You pretty much know where it is headed once you start.  Even with a short runtime, there are parts where this one lags, largely toward the climax when Max must escape from drowning (which you know he will) and Mary and Trudy wander aimlessly through the castle searching for an exit.

When it does get to the climax it is at least well realized.  However, I wouldn't be surprised if people realized the killer had a face quite like that of a certain evil wizard in a more modern series of films.

In the end, it is a decent, if predictable, piece of Italian horror.  I just wish they had let Christopher Lee dub his own voice.