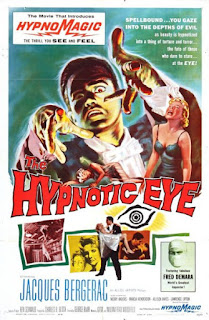 Although many people have long lamented the death of drive-ins, one of the best things to come of the 1980s was direct to video movies.  Occasionally these were of high quality and just didn't have enough of an audience to warrant a theatrical release.  Other times they were the equivalent of the poverty row movies of the 1940s or many of the b-movies that were churned out in the 1950s and 1960s that seemed to be mostly narration over stock footage.

Then, of course, there are the bandwagon films.  They are still around, but they tend to get stuck on DVD or the SyFy Channel, where people typically know what they are getting into.  Back in the age of drive-ins and when going to the movies was a typical weekend diversion?  Well, the theaters were jam-packed with quickly manufactured trash like The Hypnotic Eye, which does its best to rip off William Castle, of all people.

A young lady sets her hair on fire in front of a mirror.  She turns out to be one of many young women who have recently disfigured themselves, or worse.  After Dodie Wilson (Merry Anders) washes her face with sulfuric acid, her friend Marcia (Marcia Henderson) and Marcia's detective boyfriend Dave (Joe Patridge) think that it may have been due to a hypnotism show by local performer Desmond (Jacques Bergerac).

Dave's friend Dr. Hecht (Guy Prescott) thinks that the strange behavior might be due to post-hypnotic suggestions, and Marcia is sent in to test the theory.  She is hypnotized by Desmond, who uses a human eye surrounded by strobes to do his tricks.  She resists his initial attempt to hypnotize her by pretending, but agrees to go along with his suggestion that they meet later on.

When they do Desmond succeeds in hypnotizing Marcia.  After a night on the town (much to the chagrin of the detective), Marcia invites Desmond upstairs.  Enter Desmond's assistant Justine (Allison Hayes), who attempts to make the still-hypnotized Marcia step into a scalding shower.  She is interrupted when Dave knocks on the door.  Justine claims to be a school friend and leaves the suggestion for Marcia to tell her boyfriend, who is immediately suspicious due to the fact that Marcia did not go to a boarding school or have a roommate.

The three decide to arrest Desmond during his show, only to have Justine capture Marcia.  Not only must they rescue her, but also the audience from Desmond's power.

Or, I should say, rescue the audience from having to sit through the film any longer.  Outrageously, rather than build up tension at the end, we are led in what I assume was supposed to be an experiment in audience participation, as the Hypnotic Eye is displayed and people are led in what is essentially a game of Simon Says.

The sad thing is that this starts off well enough, with decent makeup effects and an attempt to push the sex and violence as far as they could for a mainstream movie of the time.  Jacques Bergerac, for his part, really tries to sell his part.  The efforts to make this a gimmick movie, however, undo it, with too much mugging and winking.  What may have been a fun b-movie just becomes an embarrassment to watch.