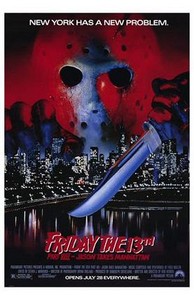 There are times when I like something that almost everybody else hates.  If I haven't seen something for 25 years or so, I start wondering if the reason I liked it was because I was just too young to know better.  After all, there are many movies I like now that I hated when I first saw them, largely due to the fact that I am at an age where I can better understand them (a few Cohen Brothers movies come to mind).

Friday the 13th Part VIII: Jason Takes Manhattan is one of those.  I always maintained that people were wrong about this one, but my suspicions recently have been that I am the one who is mistaken.  I saw parts IV and VII in recent years, and they were both entries in the series that I liked when I first saw them, but find them both to be pretty mediocre at this point.  I don't hate the third one, but when it comes to the Friday the 13th movies I prefer to stick with one, two and 9.  Turns out that, even though it's not a great movie by any standard, I should be including Jason Takes Manhattan in that list.

Jim (Todd Caldecott) and Suzi (Tiffany Paulson) are enjoying some "alone time" on a houseboat near the ruins of Camp Crystal Lake.  Todd anchors the boat and, to add some mood, tells Suzi the story about Jason Voorhees (Kane Hodder).  Coincidentally, the anchor catches on an underwater power cable, which results in transferring an electrical charge into Jason, which was his means of resurrection in the past.  He climbs on board, dispatches the two and drifts back down the river in the empty boat.

Down said river is a group of local high school kids getting ready for a graduation cruise to New York.  Suzi and Jim are conspicuously missing, but biology teacher Charles McCulloch (Peter Mark Richman) refuses to wait for them.  He is also angry that the other chaperone, English teacher Colleen Van Deusen (Barbara Bingham), has brought his niece Rennie (Jensen Daggett), whom he thinks is not fit to go on the trip.  He is also not happy about the attention she is getting from a boy named Sean (Scott Reeves), who happens to also be the son of Admiral Robertson (Warren Munson), who is in charge of the ship.

Of course, there is another stowaway, as Jason decides to hop on board and start killing the teens.  Rennie keeps having visions of Jason as a child trying to drag her under the water, something that led to her fear of water and inability to swiim - the reason her uncle doesn't want her on the boat.  Charles also refuses to believe the warnings of a deck hand (Alex Diakun) and others that Jason is on board.

The killings reach a head when the boat runs into a storm, leaving the ship disabled.  Rennie, Colleen, Charles, Sean and aspiring boxer Julius (Vincent Craig Dupree) manage to escape in a lifeboat and make their way into New York City, arriving at a harbor in a shady part of town.  They are immediately set upon by Puerto Rican gang members who kidnap Rennie in order to have their way with her.  Jason also makes it to shore, and kills the gang members in an attempt to kill Rennie himself.

The group flees through New York, only to fall victim to Jason until only Sean and Rennie are left, pursued through the streets, subways and sewers by the undead the killer.

As I said, this is not a great film by any stretch.  I do not understand why someone afraid of water, or unable to swim, should not be on a boat.  I have trouble swimming, but love boats - largely because, on a boat, you don't have to swim.  It's kind of the point.  Also, normally I find at least one teenager to be annoying, and they left out the practical joker type this time around.  Unfortunately, Charles McCulloch manages to annoy all the way through.  I know he was supposed to be despicable, but a little subtlety would have been nice.

I also know that a lot of this movie is looking at it and wondering what it would have been like if given the proper budget.  Director Rob Hedden meant for the movie to take place largely in Manhattan, as the title implies, and not so much on the boat.  Also, Lar Park-Lincoln's psychic character was from the previous movie was supposed to return, but Paramount didn't want to give her a raise.  Their are some memorable scenes on the boat, but the most memorable are the ones filmed in New York.  Too bad Vancouver stood in for the City of Lights through most of the time spent there.

On to the good stuff.  The kills in this are done well, if sometimes a bit heavy on trying to be ironic.  Kane Hodder is definitely the most memorable Jason since he put on the hockey mask.  Also, some of the actors, though unknowns, can do more than wooden line readings, which is often a problem throughout most of the series.

It was obvious that even Friday the 13th was going into the crazier realms of '80s horror, and there are some hints of that in Jason Takes Manhattan.  It is definitely not the worst, even if it is quite disappointing, given the title.  It would have been nice to see much of what was originally intended.  Unfortunately, the series had been losing money at this point, and Paramount was more than happy to unload it on New Line, who except for the ninth installment went about destroying it.