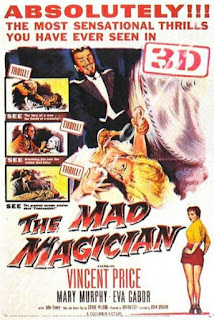 If there is one thing that I have been surprised about, it's that the 3D craze finally became a viable, and marketable, method of presenting movies.  The reason I am amazed is that it has been tried a number of times, and each time it was a short-lived gimmick.

The 1950s were the first time it was attempted on a mass scale.  Most of these movies are forgotten, as the gimmick often outweighed the movie.  At this point, the remake of House of Wax with Vincent Price is one of the few such that still gets any play from this period, and that has less to do with how it was presented and more to do with how great Price is as the villain.

It was largely Price that drew audiences at the time, and so they decided to rush out another 3D movie with him it.

Don Gallico (Price) designs some of the best tricks in the magic business.  He is also a great mimic and an expert at constructing disguises.  Billing himself as Gallico the Great, he acts out tricks that he has made for other magicians, but has designed a new buzzsaw trick for his own show.  Problem is, as he is about to debut it, his boss Ross Ormond (Donald Randolph) files an injunction against him.  Turns out the contract he signed made all of Gallico's inventions, including those done on his own time, the property of Ormond.  The trick is quickly handed over to Gallico's rival, the Great Rinaldi (John Emery).

This happens to be the last straw, as Ormond also stole Gallico's wife (Eva Gabor), and takes every effort to taunt him about it.  Having had enough, Gallico kills Ormond with the buzzsaw trick, leading to a tense moment when his assistant Karen (Mary Murphy) runs off on a date with her policeman boyfriend Alan (Patrick O'Neal) with a the wrong bag, this one containing Ormond's head.  Gallico retrieves it and manages to dispose of Ormond's remains while disguising himself as his deceased boss.

To make it appears as though Ormond is still alive, Gallico rents a room from mystery writer Alice Prentiss (Lenita Lane) and her husband Frank (Jay Novello).  Meanwhile, Claire Ormond returns from Europe and begins to wonder where her husband is, leading to an article in the paper.  Mrs. Prentiss realizes who her boarder must be, and arranges for the two to meet.  Claire surprises him, only to find out that it is Gallico in disguise.  He strangles her and makes her escape, leaving the police searching for Ormond.

Trouble is, other Mrs. Prentiss thinks something is strange, and so does Alan when all the same fingerprints keep showing up at different murder scenes.  What started as a crime of passion spirals out of control.  Meanwhile, Gallico has created both his most complicated trick, as well as the perfect way to dispose of the bodies: a working crematorium that the magician escapes from.

Vincent Price as usual is great in his villain role, and it is a role he often plays: a common man put upon until he finally snaps.  Almost everyone around him is so greedy and despicable that you can't help hoping maybe he will get away with it.  Alas, this is from the 1950s, and the rules still were that the bad guy always lost.

And here is the main problem.  It does not feel like a movie made in the 1950s.  Despite the obvious places where 3D was used, the plotting and filming make this feel like something filmed 20 years prior.  Because of that it also feels like any number of mad scientist/wronged man movies from the time.  Given that Gallico is supposed to be a master at building magic tricks, his way of dispatching people is way too mundane.  When you have a movie that you know is going to move from point A to point B regardless of what happens, you might as well throw in a little creativity in between.  Instead, except for Ormond, it's the usual stranglings.

It's not a horrible movie, and if you are a Price fan you will definitely enjoy it just for him.  Still, it is a reminder of how 3D was hung on nothing but old-hat plotting that added nothing to the dimensions of the film - and, sadly, how things haven't changed much in 60 years.