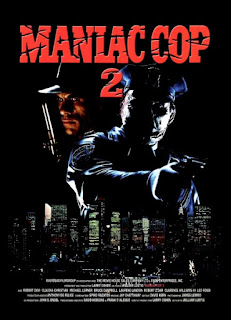 Writer Larry Cohen and director William Lustig came together to make Maniac Cop in 1988. The film was not what you would call a hit, barely making back half of its meager budget during its short theatrical run.  It did better on the home video market.  Well enough, in fact, to warrant a direct-to-video sequel.  And, much to everyone's surprise, the sequel was in many ways superior to the original.

At the end of the first movie, undead police officer Matt Cordell (Robert Z'Dar) is impaled on a pole as the paddy wagon he is driving goes into the river.  His hand is briefly seen coming up from the water and grabbing the post of the pier.  As this movie starts, Cordell makes his way to a yard filled with old police cars, and finds a working one to aid him in continuing his quest for vengeance.

Meanwhile, no one will believe Jack Forrest (Bruce Campbell) or Teresa Mallory (Laurene Landon) that the killer cop was Cordell, as everyone believes he died in prison three years prior.  They are sent to see a psychologist, Susan Riley (Claudia Christian), to determine if they are fit to go back to their jobs.  Riley is also checking on another police officer, Det. Sean McKinney (Robert Davi), who has recently been involved in a police shooting as well as having to deal with the suicide of his partner.

When Forrest is killed, both McKinney and Riley become involved with the case, as Mallory is sure that it was Cordell.  Riley is tasked with looking after Mallory, who intends to go on a popular police show and reveal that the department is covering up that the Maniac Cop did not die, especially after other officers come up dead.  On the way Riley and Mallory are attacked, resulting in the former being injured and the latter killed.  Riley manages to make it to the television show and do what Mallory was intending.

Meanwhile, while trying to solve the case of the Maniac Cop, McKinney's main case is stopping a serial killer (Leo Rossi) who is murdering exotic dancers.  While the killer, Turkell, is about his business, Cordell shows up and attempts to strangle Turkell's victim himself.  The police show up, and the two killers make their escape.  However, McKinney tracks down Turkell and apprehends him, which only leads to a massacre as Cordell comes to get him out of jail.

It turns out that Cordell needs Turkell and another prisoner (Clarence Williams III) in order to make his way back to Sing Sing and take revenge on the men who killed him.  Riley is taken hostage, and McKinney knows the only way that Cordell will ever rest is if the wrongs that made him the way he is are redressed.  He must make sure this happens, as Riley's life is at stake, and Cordell may be preparing to raise an army of killers to take over the city.

It is good that almost everyone is back from the first movie, including the writer and director.  So is the New York background.  What is frustrating is this really needs a cinematic aspect.  It had four times the budget of the original, a better lead with Robert Davi, but got shuffled off to video stores.

There seems to be more depth to Matt Cordell's character.  I think this is where my memory of him being a sympathetic villain comes to mind.  The who situation that resulted in his death is replayed from the first movie, but there is more to it than that.  It's as if he has lost everything that made him human, and he is now on autopilot, trying to get revenge at any cost.  Some of the last scenes before he takes revenge on those that killed him seem to show his humanity somewhat restored.  In contrast, Turkell is pure evil, and as Cordell's humanity returns so does the realization that he has sided with someone he would have taken off the streets in the past.

Despite the ending setting up the possibility of another sequel (which there was), the true story really concludes here.  And, although I have heard that a remake of the original film may be in the works, I hope they let Cordell remain in peace.  If the original movie can't top this, it's doubtful a remake will.