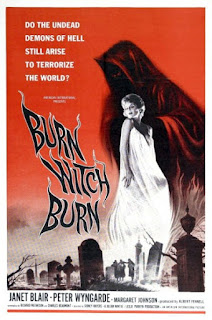 I could have sworn I was watching a William Castle movie when this came on.  For a movie that obviously wants to be taken seriously, I cannot honestly say why they would open with a narrator casting a fake "spell" to remove evil spirits from the screen.  American International may have been a studio that churned them out, but, at least in the '60s, most of it was quality.

This movie is as well.  It is just that when you get a campy opening like that you expect something cheap, and not a production that questions the power of belief and leaves a number of things hanging about what is real and what is not.  It was originally called Night of the Eagle, which sounds eerily like Night of the Demon, a movie that it shares more than a little with.

Norman Taylor (Peter Wyngarde) is a professor at a prestigious college.  He teaches a class on superstition, largely explaining why it is all just the human need to believe in the supernatural.  He is up for a chair in the humanities department, which has gained him some enemies that think that he is being jumped ahead of more deserving members of the faculty.

In class, he also has to deal with an entitled student named Fred Jennings (Bill Mitchell) who refuses to do any work.  Jennings happens to be dating Margaret Abbott (Judith Scott), a ward of rival faculty member Flora Carr (Margaret Johnson).  Margaret just happens to have a bit of a crush on the professor, which further enrages Fred.

Norman, for his part, is happily married to his wife Tansy (Janet Blair), who spends quite a bit of time at vacation cottage by the sea.  She is keeping a number of secrets from Norman: largely, the wards and charms around the house, and that she is a practicing witch.  He accidentally finds some of her items, and, after a hunt around the house, confronts her with them.  She warns him not to destroy them, as she fears that they are surrounded by people that hate him.  He is insistent, and the wards are destroyed.

Immediately Norman receives a phone call from an admirer, and things begin to go wrong.  He is almost hit by a truck on his way to campus, Margaret has filed a rape claim against him and Jennings threatens the professor with a gun.  After confronting Margaret she retracts her accusation and admits that some power came over her and forced her to call him the night before.  Afraid that Norman may die from the evil thrown his way, Tansy attempts to direct it toward her, but Norman is able to rescue her.

Despite Norman's insistence that the supernatural does not exist, it becomes more and more apparent that something is happening, and that Tansy may not be the only one in town practicing the craft.

The title this normally goes under sounds like it should be some Gothic horror drama with Vincent Price skulking around somewhere.  Instead, like Night of the Demon, it does leave quite a bit open about whether the events are brought about by magic or belief, although it falls heavily on the former.  Both Wyngarde and Blair are great as expected, given their long careers at this point.  It does get a bit annoying at one point with him running around screaming, "Tansy!" everywhere.

If you are looking for a typical '60s scare flick, as the studio tried to push it, you will be disappointed.  However, this falls into line with a number of intelligent horror films of the time, that spent more time questioning reality and faith than concentrating on cheap scares.  Also, the climax does have some scenes that make the original title make sense.  They were wise in changing it to the more popular one.