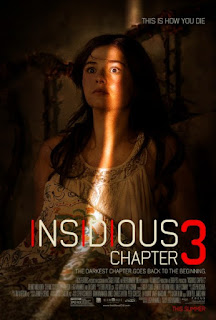 The original Insidious was a surprisingly fresh entry into the modern horror canon.  Written by Leigh Whannell and directed by James Wan, it told of a family dealing with the their young son's soul being kidnapped by a demon.  The second chapter dealt with what had happened to the father, setting the background for why the demon would have been after his son in the first place.  A common character in both movies, due to her involvement with both father and son, was psychic Elise Rainier (Lin Shaye).

Whannell himself takes over directing the third part, as James Wan was off directing Furious 7.  I must say he does quite a good job, even if this second sequel is much more traditionally paced than the first.

Young Quinn Brenner (Stefanie Scott) visits Elise to see if she can help her contact her mother, who had passed on from cancer years before.  Elise is reluctant to help, but attempts to contact Lilith Brenner (Ele Keats).  She does not meet with success, but senses another entity trying to reach Stefanie.  Elise warns her not to continue trying to contact her mother on her own.

Quinn herself is nervous about her future, as she has an audition for a theater school coming up.  Unfortunately, her father Sean (Dermot Mulroney), finds himself constantly dealing with an overload of work and family problems, shuffling some of the responsibility onto Quinn, who cannot wait to escape.  She is still sure her mother is trying to contact her, but starts seeing a mysterious entity waving at her when she goes to her audition.  The stress causes her to forget her lines, losing her the chance to go the school.  While hanging with her friend, she sees the man waving again and, distracted, is struck by a car. She briefly dies on the operating table and, while in a limbo state, encounters a wasted man with an oxygen mask (Michael Reid Mackay).

After returning from the hospital she tries to rest, but is continually accosted by the ghost.  Elise has visions telling her to help Quinn but, due to her own fear of the Bride in Black (Tom Fitzpatrick), a woman from the other side who attempts to kill her when she uses her ability, she gives up after being attacked by the Man Who Can't Breathe in her own home.

At the insistence of his son Alex (Tate Berney), Sean calls in two internet ghost hunters, Specs (Whannell) and Tucker (Angus Sampson), to help find out what is going on with his daughter.  What they find is that the entity has attached itself to her.  After it attempts to maker her kill herself, Sean and the ghost hunters manage to restrain Quinn.  Elise also makes a final decision to overcome her fears to help the girl, and together they help Elise go into the Further to bring back the half of Quinn's sole that the Man possesses.

There are no time traveling aspects in this one, and as many of the rules (and some of the characters) have already been established, it does make for a more predictable entry.  The good news is it still has quite a bit going for it, from performances to true scares (although they don't really need to amp the music like that - we get the point).  Several of the scares are quite well done as well, and the ending is not as predictable as one might think - especially since Quinn's case was never really discussed in the other two movies.  This leaves it to where things can go either way.

I know there was some disappointment with this being a prequel, considering how the second chapter ended.  I do hope that the fourth movie addresses that more, or that some of what happened here plays into it.  So far, this series hasn't truly disappointed or fallen into the wash, rinse, repeat of Saw or Paranormal Activity.