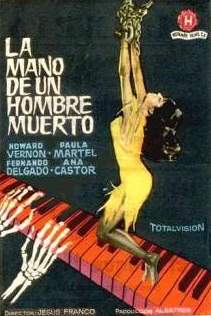 I may have said it before, but it is worth saying again.  You really never know what you are getting into when you sit down to watch a Jess Franco film.  What can usually be expected is a non-linear narrative and a fair amount of sleaze.  During his heyday he, along with Jean Rollin, was treated as a hack, someone who churned out films just to cash in on trends and make a quick buck - something that was largely anathema to the industries in which they worked.  If Jess Franco had been working largely in the British or Italian film industry, he would probably get much more respect.

I think it is a sense of disillusionment that led him (and other directors) to just turn out about anything they could and see if it stuck.  It's a pity, since if we look back on Franco's early films, we clearly see that he was a budding talent that could have gone much further during his lifetime.  At least he did live long enough to see public perception of many of his films change.

The Sadistic Baron von Klaus (also known as La mano de un hombre muerto, or The Hand of the Dead Man) was Franco's second major foray into horror after The Awful Dr. Orlof.  In the small Austrian town of Holfen, the poachers Hanzel (Serafin García Vásquez) and Helmund (José Carlos Arévalo) tell Dr. Kalman (Ángel Menéndez) a story about the local gentry.  500 years prior the ancestor of the current Baron von Klaus was executed after it was discovered that he had raped, tortured and murdered several young women.  Before dying, he put a curse on his family lineage that the male sons would do the same as he had.

Dr. Kalman of course does not believe in the story, nor does Inspector Borowski (Georges Rollin) once bodies of young women begin to turn up.  What the latter does believe, however, is that Max von Klaus (Howard Vernon), the current head of the family, may be following in the footsteps of his father, who had indeed committed similar crimes before being killed in the swamp on his property.

The murders, and the rumors of the curse, reach Karl (Fernando Delgado), a journalist who specializes in writing about lurid murders and such.  He comes to Holfen to investigate, much to the chagrin of the inspector.  Despite the rivalry, both begin working toward the same goal, and it looks more and more like Max may be the one involved.

Still, another von Klaus has returned: Ludwig (Hugo Blanco), Max's nephew, has returned due to the death of his mother (María Francés).  On her death bed, the family matriarch provides Ludwig with a key to his grandfather's secret study in the basement, which happens to contain many of the implements used in the murders, as well as a diary that may be getting a peculiar hold on Ludwig.  Ludwig's change in demeanor causes concerns for his fiancee Karine (Paula Martel), who may ultimately be the one in the most danger.

A good portion of the film is built on dialogue and descriptions of what has happened rather than on showing all the details, while the last part gets more action oriented and contains, for the time, a rather shocking display of bondage and sexual torture.  Jess Franco did like to push boundaries even at this point, but here it was done as a culmination of what came before it rather than just a semi-fulfilled promise of perversion to get people in the theater.

In large part, like The Awful Dr. Orlof, this is really not that different from your Hammer films at the time, particularly with the same type of setting and build toward a climax.  I would say that the direction, particularly that of a night-time chase through the city and the killer's attack on an inn-keeper, is truly superior to much of what was seen at the time.

There are some situations that do not make the most sense (the ending scene, for example), but then European horror often has been more about mood, setting and filming an interesting scene rather than about being a dry procedural.