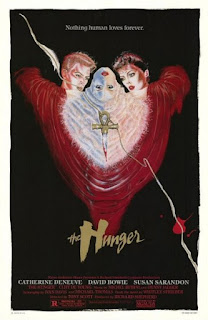 Since David Bowie's passing there has been a rush to go over his body of work, both in music and other art forms.  Predictably, most viewers immediately turned to his most accessible film, Labyrinth, in which he plays a Goblin King who steals a baby and forces the baby's half sister to go through several trials to retrieve it. The advantage of Labyrinth is that it also has music by David Bowie and a plot that most people can follow.  It's also suitable for all ages, which is a hard sell when it comes to his best film, The Man Who Fell to Earth.

The Hunger, an adaptation of a Whitley Strieber novel about vampires directed by Tony Scott (future director of Top Gun and True Romance), features Bowie prominently in the advertising, although he is only in the film for a short while.  It is also in some ways an even more challenging viewing than The Man Who Fell to Earth.

Miriam Blaylock (Catherine Deneuve) is a five thousand year old vampire who has had many lovers in the past - the most recent being her husband John (Bowie).  After a night spent hunting the clubs of New York, feeding and making passionate love, John starts to suddenly notice that he is growing older.  Since vampires are not supposed to do this, and Miriam has promised to be with him forever, he becomes curious.  She informs him that the same has happened to her previous lovers, and that the aging process tends to happen within a period of a couple days.

Both Blaylocks become interested in Sarah Roberts (Susan Sarandon), a research scientist that is exploring the links between sleep and aging in an effort to turn back the clock.  She has success in speeding up aging in the monkeys she is using, thus proving that with some effort her goals can be achieved.  While John tries, unsuccessfully, to get her attention for treatment, Miriam pursues her as her new lover.

As John ages and begs Miriam for release, it comes to pass that there is none: her former lovers continue to live on, rotting away in caskets she has stored at the top floor of her house.  She stores him away and goes about pursuing Sarah, who comes to find out that she was infected with Miriam's blood as they made love.  Furious, she tries to fight what she is becoming, even if it means her own end.

A few things I noticed about The Hunger was its continued influence.  There is a screeching violin sound heard that is also at the beginning of Aerosmith's "Janie's Got a Gun", and David Fincher's direction of the accompanying video owes quite a lot to this movie.  In fact, most of the movie seems to be filmed like an early '80s music video.  This leads to quite a few narrative problems, as the film relies more on visual style than actually forwarding the plot.

It was also rather obvious that the Countess in American Horror Story: Hotel was more of an updated version of Miriam, just without Lady Ga-Ga being able to properly ape Catherine Deneuve's style.

If you are watching this for Bowie, be assured he puts forth a great performance.  He was a good actor, which should be no surprise considering how he threw himself into any art he was involved in.  Casting him was not casting a rock star as a stunt, but as someone you could rely on to give a good performance.  I think this may be one of the harder films for fans due to the fact that it heavily dwells on mortality as well as addiction.

I did not find the pacing of the film to be a problem once it got going, but I did find the direction to be hard to take.  As I stated before, there is more style than substance here, and that is even more underscored with an ending that was forced on the film by the studio.  It deserves its reputation as a cult film as it does have many, many elements where it works, but it would have been served better by Tony Scott's more well-known directorial style instead of what is on display here.