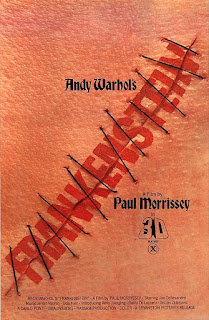 Andy Warhol, and members of his entourage, were making short films that were distributed on the underground circuit as far back as the early 1960s.  I know there is an ongoing project to rescue as many of them as possible.  Still, although Warhol's name is all over them, Paul Morrissey is the one most associated with directing the movies that bear his name.

The other name most associated with these films is Joe Dallesandro, a traditionally handsome leading man with an almost Greek physique that received attention for two of Morrissey's previous films, Trash and Heat.  These were earned both the director and actor some critical accolades.  So, what's next?  Of course!  Run off to Italy and update the Universal movie catalog.

Baron Frankenstein (Udo Kier) lives in Serbia with his sister/wife Katrin (Monique van Vooren), his children (Nicoletti Elmi, Marco Liofredi) and his perverted assistant Otto (Arno Juerging).  Being a Frankenstein, the one thing he is most interested in is sewing together parts of corpses to reanimated for his purposes.  The difference is this time he wishes to mate his male monster with his female monster.

Frankenstein believes that the Serbians carry elements of classic Grecian form, and is assembling his monsters from all the best parts, hoping their offspring will result in a new race of perfectly sculpted superman.  The female version (Dalila De Lazzaro) is complete, but he needs a head for the male.  While out one day he sees the perfect one attached to the body of Sacha (Srdjan Zelenovic), the best friend of farm hand Nicholas (Dallesandro).

Nicholas loves the ladies, and can't believe Sacha is still a virgin.  When Sacha voices his intention to become a monk, Nicholas decides the best thing he can do for his friend is take him to the local brothel so he can experience a woman before he joins the order.  The Baron and Otto follow them there and, as the farm hands leave, set upon them.  Nicholas is knocked unconscious, while Sacha is decapitated.

Nicholas wakes up and, afraid that he will be blamed for the murder, buries Sacha's body.  He goes about his usual activities of "plowing the fields" despite his friend's death, and much to Katrin's displeasure - although she decides he will do as her next boy toy, so he is brought into the castle as her new personal servant.  While there, Nicholas discovers the secret of what happened to Sacha when the two reanimated corpses are displayed at dinner.  He becomes determined to rescue his friend from the Baron, although at this point his friend merely wishes to die in peace.

I actually saw the followup movie, Blood for Dracula, before this one.  I kind of wish I had seen them in the right order, as I would have known a bit more what to expect.  Still, everything that I thought was wrong with the that one I found Morrissey did right here.  This is less a horror film and more a dark comedy, with the sex and the blood (as well as the acting) amped up to the point of ridiculousness.  Also, even though there is a scene of sexual assault in this one, it is played for genuine horror rather than seeming glorification, which was a major problem I had with Blood for Dracula.

Truth is, Joe Dallesandro is not just a pretty face.  He's a pretty decent actor, although his New York accent is completely out of place when playing a Serbian farmhand.  I think that actually ads to the movie in this case, as so much of it is completely off the wall.  Udo Kier and Arno Juerging are great here, going full-tilt into madness and enjoying every moment of it.  There is a reason that Rob Zombie keeps digging up Kier whenever he can to throw him in cameo roles.

Beyond the title character, do not go in expecting any more connection with Mary Shelly's creation than Blood for Dracula had for Bram Stoker's.  Morrissey (as well as Kier) take the character in completely new directions.  Too bad this is usually lumped in with straight horror, because it is one of the best horror comedies of all time.