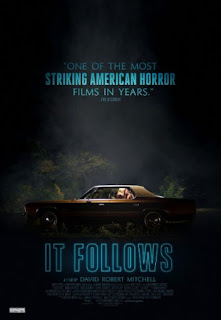 Sometimes the measure of a good movie is how it stays with you afterwards.  Or, should I say, a good premise.  I have seen a number of mediocre movies with a decent premise that sticks with you, if only to ponder how much better the movie could have dealt with it.  In the case of It Follows, writer/director David Robert Mitchell manages to do well on both counts.

In a quiet residential neighborhood outside of Detroit, Annie (Bailey Spry) runs out of her house, seemingly chased by something.  She drives to a lake and waits, only to be left mutilated on the beach.

Not far away Jay Height (Maika Monroe) has taken up with a new boy named Hugh (Jake Weary).  She seems to feel a special attachment with him, which leads to things happening as they usually do.  However, in this case, it is topped off with being chloroformed and tied to a wheelchair.  When Jay comes to, Hugh explains that he has passed something on to her.  She will be followed by something.  The thing walks, is slow, but is relentless and intelligent.  If she is killed, then the thing will once again come after Hugh.  Her only hope is to sleep with someone else and pass it on to them.

Jay sees a nude woman walking toward them along the beach, which he claims is the thing he passed to her.  He drives her back to her house and, in front of her friends, drops her off in her underwear.  The cops are called, and it turns out Hugh was renting a house in Detroit under a false name, and has since disappeared.

Despite what she saw, Jay at first does not believe what she has been told.  However, while in class, she looks out a window and sees an old woman with dead, sunken eyes moving slowly toward the building.  She flees from class and tries to convince her friends Paul (Keir Gilchrist) and Yara (Olivia Luccardi) and sister Kelly (Lili Sepe) that the thing is real.  Paul agrees to stay and watch for anything.  In the middle of the night he hears a window break, and then Jay scream as she is cornered in her bedroom.  Jay then flees the house and goes to a local park.

The commotion gets the attention of her neighbor Greg (Daniel Zovatto), and the group goes off in search of Hugh.  They visit the house that he rented, and track him to the high school he attended, which then leads to his real name of Jeff.  They find him, but he is still paranoid, as it turns out that even if you pass it on that you can still see the thing that was following you. After leaving, Greg drives the group to his parents' cabin, hoping that it will be far enough away but, as expected, the follower eventually shows up.  Jay again tries to flee, but gets in a car accident, resulting in her being hospitalized.  Since she cannot flee, Greg sleeps with her so that he will take on the curse.

At first nothing happens, but then Jay sees what she thinks is Greg, but is really the follower.  It breaks into Greg's house and kills him, meaning that Jay is once again its intended victim.  Her friends, however, think that they may be able to take care of it once and for all, and devise a plan to trap the creature and free Jay once and for all.

Like the creature in the film, It Follows is slow, relentless and intelligent.  There are rules, and ways that it can easily be passed on to others, but it does touch on the problem with how you would morally deal with sentencing a total stranger, or someone you love, to a possible death that may, at best, only delay yours.  In interpreting the film, many have seized on the sexual transmissions aspect, which even the director has said wasn't the point; in fact, the means of transmitting the curse came later.  The whole premise came from dreams of being slowly stalked by a predator that one couldn't shake.

Thus, we have quite the dreamlike movie.  Some parts did remind me of David Lynch, except that there is a straightforward narrative here.  Seasons inexplicably change within days, old technology mixes with new and there are strange items or events (like Yara's clamshell device).  Parents are rarely in the picture, and when they are their faces remain unseen.  There are also many major allusions to mortality, all taking place within the rotting corpse of the city of Detroit.

There are some occasional problems.  The acting is a bit off at times, but not anywhere near as bad as in similar independent or horror films.  Despite being filmed beautifully, the few times that scenes weren't up to snuff are jarring, and a reminder of the budget this was filmed on.  Most likely they went with the best that they had.

I have seen that there is a sequel planned for this.  I don't really know if that's wise, as it could easily wind up as bad as the Final Dimension series.  For me, I like how it ends, and really don't need to know anymore, and don't need an explanation of what the follower is.  The director didn't feel like he needed to know, either, and that's good enough for me.