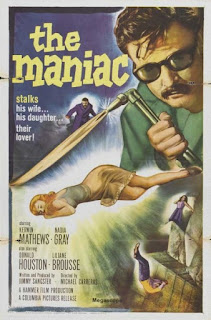 I am always excited when I run into something from Hammer that I haven't seen before, and even more so when it isn't a Gothic horror tale or monster movie.  The studio did try to branch out where it could, and often times they succeeded, even though many of the films outside their normal ouvre get ignored these days.

Then, of course, there are those which are forgotten for a reason.

Annette Beynat (Lilianne Brousse) is sexually assaulted by a neighbor who gives her a ride home from school.  A schoolmate runs and gets her father, who hauls the offender back to his blacksmith shop and goes to work on him with a blowtorch.

Four years later Annette is working as the bartender at the inn owned by her mother Eve (Nadia Gray).  When American expat Jeff Farrell (Kerwin Mathews) rolls into town, he is at first taken by Annette, but then seduced by Eve.  It turns out that Eve believes that she still owes her husband a debt of gratitude, and talks Jeff into helping her break him out of the asylum.

They do so, only to have it appear that, instead of going off to sea like he was supposed to, that he has decided to hang around.  It also appears that he is not going to give up his wife so easily.

There are, of course, betrayals and twists that occur, but nothing that you can't see coming a mile away.  It's a thin plot that has been done many times before.  The only thing The Maniac really has going for it is the location filming in the Camargue, with a number of ancient and modern ruins providing a desolate background.  It's as if the studio got some time to film in a wonderful location and just slapped the most generic of plots on.

While Hammer does have many movies that deserve more attention, they also have a lot of rote material like this that is best avoided.