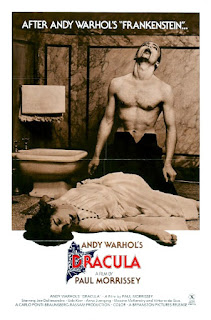 Throughout the 1960s and early 1970s artist Andy Warhol branched out into film making, largely with the assistance of director Paul Morrissey.  I say that because, if you came searching for this movie under its larger release title of Andy Warhol's Dracula, you are going to be sorely disappointed to find out that Warhol neither starred nor directed this film.  Morrissey and Joe Dallessandro were part of his inner circle, so you might say that Morrissey's films were large inspired by his aesthetic, although the main Warhol contribution is a (small) infusion of cash.

That said, this was done largely to cash in on the underground success of Flesh for Frankenstein, also known as Andy Warhol's Frankenstein, which had been released a year prior and also directed by Morrissey.  Filming had gone well, so they decided to do another one and take advantage of filming locations in Italy.

Count Dracula (Udo Kier) is dying.  He needs an infusion of virgin blood, something he can't get in Romania because everyone knows who he is.  He leaves his sister to her own fate and, at the insistence of his servant Anton (Arno Juerging), go to Italy to find a good Catholic girl that has been reserving herself for marriage.

They find what they are looking for in the Di Fiore family.  The Marchese (Vittorio De Sica) and Marchesa (Maxime McKendry) are cash poor.  All the servants have left except handyman Mario Balato (Dallessandro), who seems to hang around largely to get at two of the daughters, Saphiria (Dominique Darel) and Rubinia (Stefania Casini), who also have a thing for each other.  The elder Di Fiores are excited when the Count shows up, hoping that a marriage to one of their daughters will replenish their coffers.

Problem is, Mario does not want to give up the sisters to an aristocrat, as he has dreams of the coming proletariat revolution that will bring him equality and allow him to marry into the family.  He also becomes suspicious of the Count due to his illness and the fact they brought a very light coffin with them, which has been relegated to the family chapel, thus not allowing Dracula to get his proper rest.

Dracula also finds out in turn that neither Saphiria and Rubinia are virgins, as their blood causes him to get violently ill.  The eldest, Esmeralda (Milena Vukotic) is also unmarried, but makes no bones about the point that she once had a fiancee.  It turns out the only virgin left is 14-year-old Perla (Silvia Dionisio), who is too young for marriage.  The Count decides that he must feed anyway, leading Mario to attempt to deflower Perla himself and put an end to Dracula once and for all.

I got the feeling early on that the film was supposed to be more comedy than horror.  The campy acting is highly exaggerated and Morrissey takes every opportunity to show the two "bad" sisters and Dallessandro naked as much as possible.  Problem is, there are a number of rape overtones that really kill much of the delight that the over-the-top sexuality would have. It also makes the ending quite disturbing despite the fact that it has one of the best Dracula deaths of all the movies made about him.

It is almost as if this movie was made to imitate a John Waters film and, in fact, it probably would have worked much better if someone like Waters was at the helm.  His early films dealt with scatology, deviant sexuality and all sorts of disturbing themes, but it was always playful.  Morrissey, on the other hand, seems to be glorifying sexual assault and rape in numerous scenes.  I don't know how that worked for an audience in the '70s, but for modern audiences it takes one right out of a film, even a silly one like this, in the same way overt racism does.

That's quite a shame, because Kier is great as Dracula, the daughters are beautiful and Arno Juerging's overacting is absolutely hilarious.  I do understand why people like this, as once you understand that it is not a serious horror film it would normally be no problem to sit back and enjoy it.