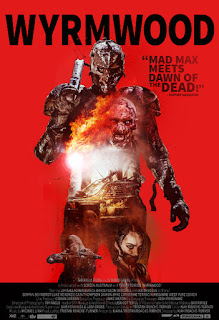 I am always wary when a movie says it is like something crossed with something.  Problem is, it rarely is anything like either one, but it is almost guaranteed to be bad.  Happily, though Wyrmwood: Road of the Dead has little in common with Mad Max or Dawn of the Dead, it is still an interesting entry into the overdone zombie genre and one of the few movies to breathe new life into it in years.

Benny (Leon Burchill) is out camping with his brother and a friend when they see a strange meteor shower.  When he wakes up in the morning he finds his friend dead and his brother a flesh-eating zombie.  Meanwhile, Barry (Jay Gallagher) awakes in the middle of the night to find someone standing in his kitchen eating raw meat, and is attacked when he confronts the stranger.  He receives a call from his sister Brooke (Bianca Bradley) after she is suddenly attacked by her friends, warning him to get out of the city as everyone is going crazy.

Barry grabs his family and goes, only to have his wife and daughter change.  He kills with a nail gun and attempts to kill himself, but is out of ammo.  Brooke herself appears to be rescued by members of the military, but is instead kidnapped and placed aboard a moving lab where she is injected with zombie blood by a mad scientist (Berynn Schwerdt) who, rather than trying to find a cure, is trying to see what he can do with the new virus.

Barry meets another traveler named Chalker (Yure Covich), and they set out to find Brooke.  Chalker's truck stalls and, while trying to get it fixed, they hear zombies moan and gunshots.  Investigating who may be alive, Chalker is accidentally killed by Benny, who thinks the man is a zombie.  Barry and Benny team up and find a barn where a number of men, including shady mechanic Frank (Keith Agius) are holed up.  It turns out that all vehicles have stalled because fuel has lost its flammability - but zombie blood, and breath, is flammable.  Devising a way to use zombies as fuel, Frank and Barry rig a truck and head out on the road to find Brooke.

The frequent injections of blood have made Brooke able to see through the zombie's eyes and control them, giving her the means to make her mistake.  After losing Frank, Benny and Barry continue on, meeting up with the military men who kidnapped Brooke.  Not trusting them, he is wary, and ends up in the right place at the right time to rescue her.  Still, they are not out of the woods yet.  In fact, they are smack dab in the middle of them, with both the dead and the military on their trail.

I guess the part that is supposed to be Mad Max is the improvised armored get-up the protagonists wear to protect from zombie bites, as well as the design of the truck, and the fact they are on a road.  Beyond that, it's not Max's desert landscape, but forested areas of rural Australia that provide the backdrop for Wyrmwood.  As for Dawn of the Dead, the only comparison is zombies.  Director Kiah Roche-Taylor and his brother Tristan have come up with an entirely different type of zombie.  Their bite is still infectious, but their blood and breath flammable, used as fuel to make them faster as night comes on.

There is quite a bit of humor as well, as this movie isn't meant to be taken too seriously.  It's obviously a labor of love, and was apparently four years of dedicated filmmaking on the weekends.  They also seem to have more to offer as the movie cuts off rather abruptly, leaving everything open for a sequel.  Hopefully there will be one, and hopefully it will be worth seeing, Brooke's powers hint to much more behind what is happening than just a random occurrence.

Of course, that is my main problem with it.  It's a fun movie while it lasts, but then it just ends.  Whatever it is ultimately trying to be will need to be determined by what (if anything) follows).