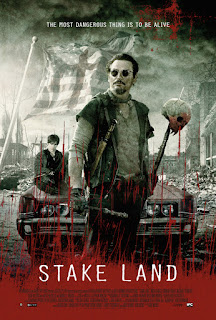 Despite the proliferation of cheap movies with cheap jump scares (not to mention just plain garbage trying to mask itself as cult material from studios like Asylum), I would say that we are entering another renaissance for horror films.  The old tropes are still there: zombies, vampires, werewolves, masked killers, etc.  What is changing is what scares us.

This can often be seen down the years more through anthology shows such as The Twilight Zone and Tales from the Dark Side.  The 1950s and 1960s had their share of technophobia, but much of what came across as scary was the civilization the west had striven to attain being destroyed by an outside other than treated us like we treated the lands we colonized.  By the '80s technology was beginning to evolve at the rapid pace that it is now, and many of the old horror staples were brought into the modern day and were often the result of misuse of technology.

Today we have generally come to grips with technological advance and, despite what media and politicians try to tell you, most of the West is nowhere near as xenophobic as it used to be.  What we have run into, though, is a number of economic problems we thought we left behind in the last century.  Rather than aliens or our reliance on machinery, the apocalypse, even if brought on by vampires like in Stake Land, is a stand-in for the economic collapse that we have become to feel is knocking at our nation's door.

I'm not going to get into one-to-one allegories, but only to say that, to most in the United States (and the Western Hemisphere), this type of collapse is more frightening than some dishes suddenly flying around with a loud noise to tell us it's time to be frightened again.  In many cases, throwing in vampires kind of tempers it, because we can sort of fight back against vampires, and they play by rules we understand.  Even those who grasp economic theory don't fully understand how everything works.

Well, on with the story we have here, and it is quite a good one.  A world virus begins to turn people into vampires.  Not suave, sophisticated, cape-wearing ones, by feral bloodsuckers intent on feeding and making more.  Stakes work against them, sunlight kills them, but they could care less about crosses and most likely they're not immortal (it's hinted that in thin population areas they are starving for lack of blood).  They are also cold-blooded, so they stay away from colder climates.

Martin (Connor Paolo) and his parents are preparing to flee north when they are attacked by vampires.  Martin is saved by a vampire hunter named Mister (Nick Damici), who helps dispatch the one that killed Martin's family.  Martin goes on the road with him and Mister begins to teach him how to fight back.  Their goal is move northward, where populations were thinner and there should be less vampires.  There are a number of blockaded towns along the way where some normalcy and trade persists, but they are set upon not only by the vampires but by the Brotherhood, a right-wing cult attempting to reestablish a "pure" America.

Mister and Martin run afoul of the Brotherhood after killing two of their members they find trying to rape a nun (Kelly McGillis).  They rescue her, but are soon captured in an ambush.  One of the rapists turns out to be the son of the local Brotherhood leader, Jebedia Loven (Michael Cerveris), who decides to turn the Sister into a breeding stock and make Martin a slave.  He leaves Mister for dead.  Martin, however, decides to escape and get back to the car for weapons so he can free the Sister, but finds out Mister got there before he did.  They capture Jebedia and leave him to the vampires.

After rescuing a former marine named Willie (Sean Nelson) who had been left for dead by the Brotherhood and picking up a pregnant traveler named Belle (Danielle Harris), they continue north toward the destination of New Eden, arriving in the town of Strivington, where they are reunited with the Sister.  Martin admires how things have become better, but the town is attacked by the Brotherhood, who drop vampires from a helicopter in order to attack the population.  The group lasts the night and continues on the back roads to avoid the Brotherhood, but ultimately the car breaks down, forcing them to walk.

Working together, they are now all survivors, moving toward an ultimate goal of escaping both the Brotherhood and the vampires and establishing new lives for themselves.  Still, there is much more ahead of them, and not all of them will make it to New Eden.

Stake Land has been compared to The Road, but I find it a lot more optimistic.  Since the vampires have trouble dealing with cold and may starve eventually, Canada is a good place to try to reestablish everything.  And, before the Canadians start yelling at me about believing that Canada is some sort of frozen wasteland, most of this movie takes place in the autumn.  It is starting to snow by the end, hinting that winter is coming on, which in this case may give the survivors a good chance.

That said, this is more of an apocalyptic road / survival movie than an action film.  You actually do care when characters die in this, even peripherally.  I think much of that is that the film isn't color-shaded like most of what is out today.  It looks realistic enough, and since it is still close enough to what caused the apocalypse you don't find yourself frustrated about the usual holes in the plot about vehicles running on gas that should have expired years ago (a constant frustration I have with The Walking Dead).

The performances by Connor Paolo and Nick Damici are especially good, and it helps that they do have a chemistry going on throughout.  I also like that Mister remains more of a storybook character rather than being made too human.  That said, there is not much time spent on back story for any of them, but that would just be a waste.  As Mister said, they don't do history.