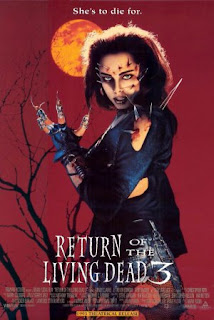 Return of the Living Dead III is one of those.  It received a very limited release in theaters in the United States, but was largely intended for the video market.  The strange thing is this series really hadn't played itself out; the first one is a classic horror comedy, while the second is largely annoying but still with some good parts.  Since the third decided not to rehash the plot of the other two, and some actual effort went into making it, one would think it would have seen a wider release.

We find Colonel John Reynolds (Kent McCord) with his son Curt (J. Trevor Edmond) at a military base just outside of Los Angeles.  Curt, tired of traveling around and his father's inattention, is feeling like setting down roots with his girlfriend Julie (Melinda Clarke).  On a lark he steals his father's keycard and he and Julie sneak onto the military base to see what dad is up to.

It turns out that experiments with trioxin, the gas which caused zombies to rise in the first two films, is still being played with.  The barrels of the gas itself contain dormant zombies from the previous outbreak.  Reynolds's idea is to use a paralyzing projectile to control the zombies.  Julie and Curt witness a dead body being brought back to life, but leave so as not to get caught prior to the paralytic wearing off, resulting in the deaths (and resurrections) of a couple lab technicians.

Due to his failure, Colonel Reynolds is told he will be taken off the project and relocated to Oklahoma City.  The project is given over Colonel Sinclair (Sarah Douglas), who wants to use the reanimated corpses to power an exoskeleton that can be controlled and directed during warfare.  When he tells his son, Curt declares that he is not going with him, and he and Julie head off for Seattle.  Just outside of the city, however, Curt spills his bike and Julie hits a telephone pole, breaking her neck and killing her.

Curt takes her back to the military base and resurrects her using the trioxin.  Narrowly escaping the zombie that was stored in the barrel, they head off on their original destination, but Julie is overcome by an uncontrollable hunger.  After a confrontation with Hispanic gang members at a liquor store, she realizes what she craves is human flesh - and specifically brains.  The liquor store owner is shot and decides to go with them to the hospital, but Julie ends up snacking on his brains on the way, turning him into a zombie as well.

Meanwhile, one of the gang members was bitten by Julie, and he begins to turn, angering his friends who decide to come looking for her.  Julie, disgusted by what she has become, attempts to kill herself by jumping into the LA River, but both her and Curt and rescued by Riverman (Basil Wallace).  Julie discovers that she can temporarily stave off the hunger by causing herself pain, and sticks various items under and through her skin - a situation that excites gang member Santos (Mike Moroff) when he first arrives, but she ends up killing and turning him as well.  The bitten member also turns and dispatches not only his friends but also Riverman.  Colonel Reynolds and his crew show up and disable the zombies, who are all brought back to the base to become part of Sinclair's experiments.

Curt, seeing what is done to Riverman and horrified that it will happen to Julie, frees her, which also leads to a number of other zombies being freed from their barrels and the base going on lockdown.  Curt must decide what is more important - the fate of the world, or his love for Julie.

What will strike a viewer seeing this is that, instead of an outright blood and gore film (although there is plenty) we have a sort of weird love story.  Julie does everything she can to maintain her humanity for Curt's sake even as she feels it slipping further and further away.  It also adds to a larger story arc that could have been explored if the series went on from here, which is that the O'Bannon zombies somewhat retain some of their humanity and are aware of what has happened, unlike the Romero zombies which are largely a clean slate.

The performances are above what one would normally expect, and the budget (though obviously limited, which can be seen in several places) much better than for most DTV films of the time.  And I think that the format it was released is the only reason it went unnoticed for a long period.  If it had received a theatrical release it may have jump-started the series a bit.  Instead, the follow-ups by all accounts are the typical cash-in garbage.