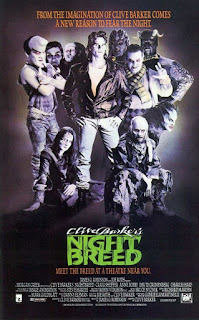 I have to admit that I have never really read many of Clive Barker's novels or stories.  I did give him a chance at one point, with The Great and Secret Show, which in hindsight was probably not the best place to start.  At some point I plan on getting deeper into his work and, despite my disappointment with that novel, it's Barker's film work that continues to keep me curious.

Rarely are writers good at adapting their own material for the screen, and even rarer do they turn out to be skilled at directing.  Michael Crichton is one of the few that come to mind (The Great Train Robbery and Looker are both good films), while a more typical result is Stephen King's one directorial effort, Maximum Overdrive.

Clive Barker hit the mark at the beginning with the movie Hellraiser, which went on to become a franchise (although there is not much worth watching after the third film).  However, other than story and characters, Barker wasn't involved in any past for the first.  With Nightbreed he planned to handle the whole thing himself, making what he described as the "Star Wars of horror films."  Planned as a trilogy, it unfortunately never got beyond the one movie.

Aaron Boone (Craig Sheffer) is a former mental patient who has got on with his life, enjoying it with his girlfriend Lori (Anne Bobby).  In his younger days he believed in a place called Midian, a city where monsters lived and would take you in once you were rejected from the "natural" world.  Through years of treatments Boone has come to believe that Midian never existed.

His life is disrupted his former psychiatrist, Dr. Philip K. Decker (David Cronenberg) contacts him and begins to convince Boone that he is a serial killer that has been murdering families, as the murders are almost identical to what Boone described to Decker in his dreams.  Decker gives Boone some pills to take and sends him home.  The pills, rather than helping him, wind him up in the hospital, as they were hallucinogenics rather than lithium.  Conveniently, Decker has brought Detective Joyce (Hugh Quarshie) to the hospital with stories of Boone confessing.

While in the hospital Boone meets Narcisse (Hugh Ross), a mentally ill man that begins to speak of Midian.  When Boone questions him he provides an exact location - before carving off most of his face.  Boone escapes the hospital and heads to Midian, while Decker interrogates the dying Narcisse.

Boone makes it to Midian, which turns out to be a large cemetery, and encounters Kinski (Nicholas Vince) and Peloquin (Oliver Parker), who reject him.  In fact, Peloquin prefers to make a meal out of Boone, and manages to get a chunk out of him before he flees the graveyard.  He is immediately confronted by Detective Joyce and a number of police, led there by Decker.  Decker makes as if to speak with Boone, but while doing so suddenly yells that Boone has a gun and ducks.  Boone is immediately killed by the police.

Lori identifies Boone's body, but after everyone leaves Peloquin's bite brings him back to life.  Boone returns to Midian and becomes one of the Nightbreed, but soon is torn between his new home and Lori when she arrives to find out what happened.  Also returning is Decker, who has been revealed to be the real serial killer, and whose true goal is to use Boone to find Midian and destroy its inhabitants.

He finds aid in his task from a fascist small-town police chief named Captain Eigerman who gathers his men, as well as a number of townspeople, to destroy Midian.  It is now up to Boone to lead the Nightbreed and prevent the coming genocide.

I can understand why critics had a hard time when this originally came out.  I have seen the theatrical cut a couple times and, while I always liked the movie, it was a huge mess.  The monsters were always cool (they are the good guys for the most part), and David Cronenberg makes Decker one memorable villain.  Too bad 20th Century Fox focused on his character and made Nightbreed look like a slasher film rather than a dark fantasy movie.  And, while the audience that did see the movie got something much different than they expected, it had been cut down from close to three hours to just over 90 minutes.  I always remember lots of cuts of the monsters looking around (and the guy drumming on the walls) and Decker with his button mask, but nothing that developed any plot until the end.

Watching the director's cut (which is two hours and changes a number of things in the general narrative) brings things together a bit better.  I don't really think we needed to see much of Lori's gig performance, but there are many more scenes of the monsters while she journeys through the different levels of Midian in search of Boone.  This gives quite a bit of context as to who they are and how they live which was missing from the original.  We were always supposed to sympathize with the residents of Midian, and actually meeting more than a handful. helps.

Even though a review I read said that most of the movie remains unchanged, I disagree.  I found that the story flowed in a way that it made quite a bit more sense and is, in fact, a rather linear one despite all the different layers.  I can see where this was intended to be more of a mainstream film than Hellraiser, albeit quite a quirky one, because there is no deliberate attempt to confuse the audience like there was with the original.  Also, when the studio had it recut, it was obvious they had no intention of letting Barker make the sequels, while this version would have smoothly segued into the next chapter (with the former priest Ashberry [Malcolm Smith] set up as the main villain going forward, and Decker's story remaining finished).

I know many would like to see the full "Cabal" cut, but really two hours fits this movie perfectly.  Even the theatrical version has grown in reputation over the years, and there was talk of making a television series based on it.  I hope something (and not a CGI-filled, soulless remake) comes down the line, as there is much more story here to tell, and seeing Nightbreed closer to the way it was intended makes me hungry for much more.