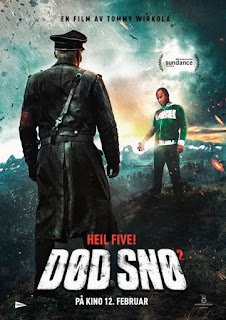 The original Dead Snow came as a bit of a surprise.  I had avoided it since zombie movies have literally flooded Netflix, the hordes of bad ones struggling to eat the brains of unsuspecting horror fans.  However, a few friends recommended it and, to my surprise, it was less typical zombie film and more like John Carpenter's The Fog crossed with Dead Alive.

So I was quite happy when I heard a sequel was in the works.  And, unlike many planned sequels to indie horror films that never see the light of day, this one made it.  It also manages to beat the original in bad taste and fun.

We begin from where the original left off.  Martin (Vegar Hoel) has managed to give the gold back to the Nazis and escape, although he accidentally killed his girlfriend Hanna (Charlotte Frogner) in the process.  He also accidentally forgot to put a coin back in the box, and Herzog (Ørjan Gamst) and his troops come after it.  Martin manages to get away, scraping Herzog off the side of his car with the help of a passing truck, and throws the coin out the window.  However, exhaustion and loss of blood (as well as the Norwegian version of NPR) results in him crashing the car.

Meanwhile, Herzog retrieves the coin and kills the trucker, only to see the name of a town printed on the truck itself.  Seeing the distant lights of a small city, he gathers his horde and marches.

Martin wakes up in a hospital to find that he is under arrest for the murder of his friends.  Even worse, Herzog's arm ended up in the car and the doctors, mistaking it for his, sewed it on to him.  The arm, possessing supernatural strength and a single-minded urge to kill, leads Martin to attack everyone in the room.  Sedated, he wakes up to find an American kid named Bobby (Carl-Magnus Adder) taking pictures of the arm and sending it to the Zombie Squad back home.  Excited about the prospect of a zombie squad, Martin tells Bobby to come to Norway right away to help with Herzog.  Marin escapes and is contacted by the squad's leader Daniel (Martin Starr), who with his companions Blake (Ingrid Haas) and Monica (Jocelyn DeBoer) head to Norway to help.

Martin, meanwhile, visits a World War II museum to learn more about Herzog and what he may be up to.  With Martin's name in the papers as a dangerous criminal, the museum's receptionist Glenn (Stig Frode Henriksen) is none too glad to have him as a visitor.  Still, they discover that Herzog was once tasked by Hitler himself with protecting a secret German naval base at Talvik, and failed.  Herzog is now gathering a zombie army to destroy the city in revenge.  While at the museum the zombies attack a bus full of tourists, and Martin and Glenn witness Herzog using supernatural powers to make them zombie slaves.  After the Nazis and their minions steal a tank and head toward Talvik, Martin discovers he also now has that power due to his new arm.

Daniel and his companions arrive with a plan: use Martin's new powers to raise a squad of Soviet soldiers that were murdered by Herzog's men while prisoners of war, and use them to save Talvik and, possibly, the rest of the world.

So, yes, if you are wondering, you do get an epic battle between Russian and Nazi zombies at the end, as well as local police, Martin and the Zombie Squad all joining in.  Vegar Hoel manages his role well, which is much more developed since the first movie, and happily manages to not turn into an Ash wannabe.  In fact, he's a lot more adaptable to becoming a hero.  Since the actor is also one of the writers, there was probably a conscious effort to depart from making anything too close to the Evil Dead films while still maintaining the comedic pace.

The one misstep, though, is the Zombie Squad itself.  The girls are cute, Daniel is an interesting character in himself, but largely it's the same old nerd jokes that have been tossed around forever.  They're fine when action is happening, but in too many cases they just shout catch phrases.  The two girls do have a great line after blowing up a bunch of zombies, mostly with Glenn's help.

Also, if you are offended easily, then I am assuming you never saw the first movie.  However, this amps it up, and I'm talking to levels that most films don't go even for an uncomfortable laugh.  I found it funny, but I also found Hobo with a Shotgun to be enjoyable for some of the same over-the-top reasons and, yes, it goes to some of the same places with killing as that movie did.  Let's just say nobody's safe, since I don't want to ruin the enjoyment.