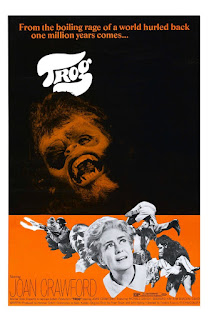 Too often the bad movies I see are just that - absolutely horrible, barely watchable cliched retreads.  However, I think I have stated before that a really bad film is often better than a mediocre film, because there's a certain sort of bad that just makes you want to keep on watching.

Such is the case with Trog, a cheap British production primarily known as being Joan Crawford's last movie.  Of course, a bad movie with star power also has to have a decent director behind it, and this time it is Freddie Francis, who was also responsible for The Creeping Flesh and They Came from Beyond Space.  Francis was also well-known as a cinematographer, and that skill is on display here, as despite its micro budget, the film is quite gorgeous to look at.

While out to do some exploring, three spelunkers come across a cave they have never explored before.  Following an underground river, they come across a large chamber.  However, Cliff (John Hamill) is killed by an unknown inhabitant of the cave, while Bill (Geoffrey Case) is gravely wounded and left in shock.  Malcolm (David Griffin) manages to get Bill to safety and contact Inspector Greenham (Bernard Kay), the local policeman, and let him know what happened.

At first no one believes Malcolm except for Dr. Brockton (Crawford), who returns with Malcolm and gets a photograph of the creature.  This leads to a media circus and an all-out effort to capture it, during which an aquatic team and several reporters are killed and injured.  The creature, man-shaped with an ape's head, comes above ground and is tranquilized by Dr. Brockton before it can do any harm.

Dr. Brockton names the creature "Trog" (Joe Cornelius), and with Malcolm and her daughter Anne (Kim Braden) begin to discover the history of what she believes in the missing link.  Meanwhile, local real estate developer Sam Murdock (Michael Gough) demands that the creature be destroyed.  Inspector Greenham, however, believes that first it should be determined if it is animal or human, and an inquest begins.

Trog begins to respond to Dr. Brockton and, with a team of international scientists, they are able to discover more about his origins.  Despite this, Murdock's efforts to prove that Trog is merely a savage creature result in the apeman running loose, which may lead to tragedy for both the town and the creature.

It is obvious that Joan Crawford was here for a paycheck, albeit a meager one, as was Michael Gough.  Regardless, they both put in great performances, given that they're costarring with one of the most ridiculous looking creatures ever.  At first I was wondering how the movie was able to get a decently articulating mask, but according to IMDB it was left over from the opening scene of 2001: A Space Odyssey.

That's not the only thing recycled here.  When they probe Trog's memories, we see signs of dinosaurs fighting, a volcano erupting and then the world turning to ice.  The dinosaurs themselves are from a movie called The Animal World, with stop motion by Willis O'Brien and Ray Harryhausen.  Exciting as it is, even in 1970 it was well-known that outside of The Flintstones that dinosaurs died out millions of years before humans.  However, this movie is definitely not one to put science ahead of some free public domain footage that's more exciting than most of what happens.

Still, Trog has its charms.  The final act is well done (and pretty bloody) despite the silly creature.  It's not one that I would choose to end my career on, but great actors have gone out with much worse.