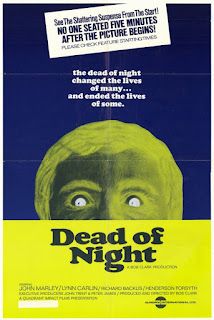 Bob Clark arguably made one of the biggest cult movies in history.  Every year, millions of buy it, get together in groups and quote every line from it.  Critically panned when it came out, it has grown to become one of the best known examples of its genre and has entertained three generations of kids and adults.

That move, of course, is A Christmas Story.  At the time many people couldn't believe this endearing bit of nostalgic family film making came from a guy who had made two of (by reputation, less by act) raunchiest comedies of the '80s: the first two Porky's movies.

Long before that, though, was another Christmas-themed movie: Black Christmas, an early slasher film with a young Margot Kidder, that followed on the heels of this grim horror film with its thinly-veiled commentary on what the Vietnam war was doing to the United States and the soldiers who were fighting.

Andy Brooks (Richard Backus) is a young U.S. soldier who comes to the aid of a fellow soldier, only to be shot from behind.

Over dinner, his father Charles (John Marley), mother Christine (Lynn Carlin) and sister Cathy (Anya Ormbsy) sit down for a family meal.  Christine talks about Andy and prays for his safe return, but it looks like that is not to be.  An Army Captain friend (Arthur Bradley) stops by to deliver the bad news that Andy was killed in action.

The grieving family is awakened in the early hours by a knock on the door by the last person they ever thought they would see again: Andy.  It turns out that rather than perishing, he survived his wounds and returned home - albeit not mentally in the same condition as he left.  Appearing to be shell-shocked and prone to fits of violence, Christine tries to coddle him while Charles becomes increasingly frustrated, particularly after Andy kills the family dog.

To make matters worse, after discussing Andy with his physician friend Doc Allman (Henderson Forsythe), the doctor becomes concerned that Andy may have been responsible for the death of a truck driver (David Gawlikowski) that was found brutally murdered with puncture marks where his blood had been drained.  After visiting with Andy and voicing his fears, Andy follows the doctor back to his home where the truth is revealed: Andy did not survive, but is instead an animated corpse that must inject blood into his veins to keep from rotting away.

After Andy kills the doctor, Charles tries to run interference, but changes his mind when he finds out that Andy has gone out on a double date with Cathy, her boyfriend Bob (Michael Mazes) and his old flame Joanne (Jane Daly).  Things go about as well as expected, the body count rises and the police must now deal the monster terrorizing their town.

It doesn't take any stretch of the imagination to understand that Andy's state was meant to represent not only PTSD, but also the crippling drug addiction many veterans suffered.  Also on display is the frustration of his father, himself a veteran of World War II, not understanding that the situation for his son is quite different than it was for him upon returning.  The fact that he injects blood has drawn some comparisons with George Romero's Martin, but in this case the monster is real.

One thing I was expecting as it neared the end was some sort of horrible, cheap 1970s zombie makeup.  However, that isn't what you get here, since after all this was Tom Savini's first job with a feature film.  He knew his craft back then, showing different stages as Andy decomposes toward the end, often in much more detail than one would expect.

What I was expecting when I began watching was another inept, enjoyable (but laughable) film from the 1970s.  I can say what I got from Dead of Night is one of the few thrills I have had from a movie in recent years.  It has its problems, but those are largely able to be ignored.  This movie provides a great story (similarities to The Monkey's Paw most likely intentional), surprisingly great effects and some scenes of outright brutality you do not often see in American films (the cop getting slammed against a telephone pole reminded me of something you would see in a Dario Argento film, for instance).  Though I may be in the minority, I found this much preferable to Black Christmas, which seems to get much more attention.

Also, don't let the PG rating fool you.  There is no nudity, but this would easily be an R-rated film these days.

I just wouldn't suggest to your grandmother a double feature with A Christmas Story.