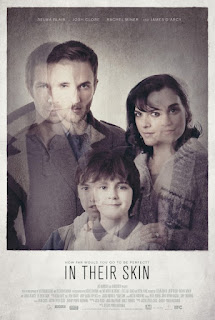 Ever spend a good portion of the movie yelling at the main characters for their stupidity?  That is what you will end up doing with In Their Skin, which follows the recent "strangers show up and try to kill you for no reason" formula.  I guess it made enough money for Stangers and Them that studios are just starting to churn this out.

In truth, this whole genre largely goes back to Sam Peckinpah's Straw Dogs, in which a family is set upon by supposedly "real man" survival types while the weak father (who typically doesn't like violence) has to suddenly defend his family and become a "real man" himself.

Mark (Joshua Close), Mary (Selma Blair) and their son Brendon (Quinn Lord) visit Mark's family cottage in the woods in order to reboot after the death of their daughter.  Understandably, things are tough between the couple, with Mark feeling responsible for the death and Mary feels the family growing apart.  To make matters worse they suddenly see a car following them as they walk through the woods at night.

The next morning they awake to strange sounds outside and find Bob Zakowski (James D'Arcy), his wife Jane (Rachel Miner) and their son Jared (Alex Farris) dropping off firewood.  Mark is understandably upset about the intrusion, but agrees to get together with them for dinner later.  During the dinner the Zakowskis start to ask a number of uncomfortable questions, and things come to a head when Jared gets mad over losing a video game and holds a knife to Brendon's neck.

Disturbed by the turn of events, Mark decides to cut the vacation short and leave in the morning - a plan that is interrupted when their dog is killed and tires slashed.  It turns out that the Zakowskis actually plan to assume the family's identities so they can live the "perfect" life.  It's obvious that both families can't survive, so now it is up to Mark and Mary to survive the night.

Already I am sure you are seeing some problems with the plot.  Despite learning where they live, who they are and many intimate details, how they actually plan on convincing anyone that they are truly such public figures as a lawyer and a real estate agent is beyond me.  Bob doesn't display much skill beyond accents, and Jane is halfway around the bend as it is.  While it is obvious they have gotten away with similar things before, it has largely been because they have stayed in isolated areas afterward.  It is hinted that they fully intend to take over the family's lives among their actual friends and family.

Now, where the major frustration comes in.  Mark has a chance to end the situation numerous times, first by shooting Jared and later by shooting Bob.  Without any key component the whole plan doesn't come off.  Still, Mark is reluctant to pull the trigger, for reasons never fully explained, despite the fact that there isn't even really any negotiation - Bob makes it clear everyone is going to die at the end.

The movie does build up a certain atmosphere at the beginning, but the plot is simultaneously a retread and, where it isn't, absolutely impossible to believe.