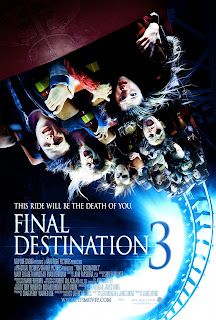 I got my hopes up a bit during the opening credits.  Truthfully, I really liked the first two installments of this series, and seeing James Wong (who was involved in many of the best X-Files episodes) and Glen Morgan (responsible for a number of my favorite Canadian-based sci-fi series) teaming up on this one I thought I might be in for something more than another cash-grab.  I was mistaken.

Wendy (Mary Elizabeth Winstead) is taking pictures for yearbook during her senior class's trip to a local amusement park.  When she has a premonition about most of the class dying on a roller coaster ride, she panics, getting off and causing seven others to get off with her.  Everyone thinks she is crazy, but the accident happens, killing her boyfriend Jason (Jesse Moss) and best friend Carrie (Gina Holden), who were unable to get off the ride, as well as several other people.

Soon after the survivors start to die in extremely complex accidents following the order in which they would have died.  Wendy and her late friend's boyfriend Kevin (Ryan Merriman) figure this out and try to save as many people as they can as well as themselves before death can claim everyone.

As simple as that.  It's the first movie all over again, but with a roller coaster and the deaths getting more complicated and ridiculous.  The roller coaster accident and drive-through scene may be well done, but largely the film is predictable and dull.  Any sense of originality that stems from having death itself as the villain is completely gone.

I guess on the DVD you have the ability to choose mercy for the characters.  If you only you could choose mercy on the audience and end this after number two.