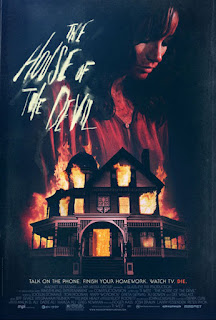 Ah, the Satanic Panic of the early 1980s.  Ritual abuse was going on everywhere.  Rock groups were using backwards messages and hidden meaning in songs to drive our young people into the arms of the devil.  The conspiracy reached to the highest levels as the end times approached.  It was a war for our very souls.

In truth, it was a bunch of charlatans trying to sell their books to gullible Christians.  Judas Priest was definitely not telling their fans to kill themselves (especially in a song they didn't write).  Johnson and Johnson executives were never holding secret sacrifices in their office suites.  Those who claimed abuse were either seeking attention or had false memories implanted by opportunistic psychiatrists.

Of course, the Warrens were charlatans as well.  That didn't mean we couldn't get some good movies from there supposed exploits.

The Satanic cult movie had been around for quite a while and, though director Ti West did his best to make this look like an early '80s film, the style of movie itself had played out by the early 1970s and is best represented by a number of Hammer films.  It was nice to see a movie returning to that plot and style because, even though it adds nothing that hasn't been seen before, The House of the Devil is quite refreshing.

Samantha (Jocelin Donahue) is a Connecticut college student who is looking to find a place for herself off-campus.  She is able to find a nice house to rent, but has to come up with the first month's rent by Monday.  The opportunity comes in a babysitting job.  At first the strange person she talks to fails to show up, but then calls again after the person he originally hired balks at the job.  Offered $100.00, she gets her friend Megan (Greta Gerwig) to drive her out to the house.

The house is in the middle of nowhere and abuts a neighboring cemetery.  Not to mention it is the night of a full lunar eclipse.  When Samantha arrives she meets Mr. Ulman (Tom Noonan), who is preparing to go out with his wife (Mary Woronov) and admits upon arrival that the job is not to look after a child, but rather after his elderly mother.  Turns out he has had trouble finding someone to do so, and Samantha is his last chance, and he is willing to pay her almost anything.

Samantha is of course suspicious but, needing the money, eventually agrees to the job.  Alone in the house except for the mother who is supposedly somewhere within, she begins to occupy her time until the Ulmans return.  After ordering pizza from the number left on the refrigerator, she finds that it tastes funny and throws it away largely uneaten.  However, she has eaten enough and, while heading up to a room in the attic, falls into a drugged stupor.

Upon waking, she finds herself tied to a pentagram and surrounded by the Ulmans and an old lady, supposedly the mother, and part of an unholy ritual.  She must now escape the house and whatever fate the Ulmans have in store for her.

As far as I can tell this is set on December 30, 1982.  The other total eclipse that year was in June, and at this point school is in session and it is quite cold outside.  Yes, I know school usually isn't in session at that time in December, but it makes more sense that there might still be more students around at that time than in June.  What through me off was the Fixx's "One Thing Leads to Another", which is from 1983, but that is better seen as an anachronism as there were no total lunar eclipses visible in North America that year, and I believe the June 1982 one was the first one I ever got to witness.

The reason I mention this is because, since true-to-form of the movies this pays homage to, there is very little that happens during the first two thirds of the movie.  Set-up and atmosphere are what's important, and while I definitely appreciate this (since I saw where they were going with it) it does give someone who grew up in that period of time the opportunity to play "spot the anachronism."  It's not so much a criticism but rather to see how much bleeds through because it is almost impossible to restore everything back to a specific time period.  Even if you lived at that time things get blurry.

I was rather happy that everyone dressed normally and not in the wild '80s fashions that often get brought up these days.  Outside of movies, rock bands and scene kids, no one ever wore that stuff.  Samantha's jeans and flannel was quite common, although the feathered hair was largely going out of style by then.

Enough nostalgia.  While the homage to old movie-making styles was great, there was one point in how the movie was made that current filmmakers need to understand.  Until the end there is only one scene of violence or gore, which comes out of nowhere and is quite shocking.  The major action, as well as the majority of violence and blood, comes at the end and all at once.  It's important because, up until then, the audience knows everything is wrong and anticipates what is going to happen.  If it constantly happens, you might as well make it a comedy, because at some point it just gets ridiculous.  Violence when it does erupt in reality is quick and vicious, and that is what we have here.  It all comes down to buildup and release rather than constantly bludgeoning the audience.

I wouldn't call The House of the Devil a masterpiece by any stretch, and I think audiences would find it tiresome to have too many films more concerned with paying direct homage to their predecessors rather than applying what was learned to modern horror.  Still, it is a bit like hitting the reset button.  Here is to hoping more movies like this get made and that modern audiences have the patience to understand that they do not need everything thrown at them at once to be suitably frightened.