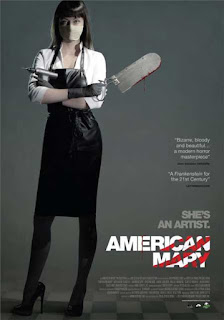 American Mary is one of those films I can admire but be disappointed with at the same time.  It tries for the body horror of David Cronenberg, but also dabbles in being a classic revenge story.  At points it even goes into slasher territory, with a number of nods to Clive Barker (including the last name of one the characters).  In the end, though, it seems to lead up to a whole lot of nothing.

Mary Mason (Katharine Isabelle) is a med student in Seattle that is training to be a surgeon.  In fact, she is promising enough that she is constantly hounded by her professor, Dr. Grant (David Lovgren) to do even better.  Her main concern at the moment is how to pay her rent and her for her phone.

The next day she receives a call from one of Billy's dancers, Beatress (Tristan Risk), who has had herself altered to look like Betty Boop.  Beatress offers her $10000.00 to do an operation on her friend Ruby (Paula Lindberg), a fashion designer whose desire is to be made into a living doll - including the fact that dolls are anatomically incorrect.  She does the surgery, though she has trouble coming to terms morally.

This all changes when Dr. Grant invites her to a party held by another professor, Dr. Walsh (Clay St. Thomas).  Unfortunately, the party is meant to lure female students for other purposes than career advancement.  Mary is drugged and raped by Dr. Grant.

Deciding to quit med school and fully embrace illegal body modification surgery, she has Billy and his bouncer Lance (Twan Holliday) fetch Dr. Grant so that she can use him as both her means of learning more of the craft as well as being her portfolio.  Her reputation grows in the community.  However, it is not long before a Detective (Jon Emmet Tracy) comes looking for Grant, especially since the secret of what the parties were for has come out.

Mary finds it difficult to deal with not getting caught for what she has done to Grant, keeping up her reputation and dealing with her emotions over what happened at the party.

Things go at a pretty good pace throughout most of the movie, but it seems like Jen and Sylvia Soska wrote themselves into a corner at some point.  There are issues about Billy's unrequited love for Mary that never seem to figure into the larger plot.  When it seems that there may be a direction that subplot is headed, the movie ends abruptly.  What should have been a shocking conclusion is merely a thud.

Katharine Isabelle's performance as Mary may seem monotone, but that's really how the character is.  She tries to push her emotions aside, and becomes better at it as time goes on.  I wish the same could be said for all the actors, as some of them are absolutely awful.  I could have sworn some of them were reading phonetic English the way they were delivering their lines, particularly David Lovgren.

The Soskas probably do have a good future in the genre, but I would like to a see a movie where they have carefully thought it out through the end rather than just going off of an interesting premise.  Some sort of satisfying conclusion, rather than just throwing in the towel, would have been appreciated.